Trey Johnson has learned how to roll with the punches.

Halfway through his bachelor’s degree at Texas A&M, he realized he didn’t want to become a veterinarian anymore. After a visit with a guidance counselor, he pivoted to a Wildlife and Fisheries Science degree and quickly realized he had found his niche.

For a year before he graduated, he worked as a wildlife technician for Texas A&M AgriLife Research Extension working with bobwhite quail, which ignited an interest in upland game birds. He grew up hunting and fishing but took up quail hunting for the first time in college and it quickly became his passion.

In the months before he graduated he decided he wanted to pursue a master’s degree, but soon realized he should have been applying to graduate schools way before then. So, he pivoted again and applied for a job instead as a research technician for a Utah State University project in North Dakota.

“I graduated from A&M, and three days later, I was in Bowman, North Dakota, working on a sage-grouse translocation project. We radio collared greater sage-grouse hens and conducted vegetation surveys, literally in the middle of nowhere. It was a great experience.”

He came back to Texas after the project ended a few months later for a research technician job with the Rolling Plains Quail Research Ranch. There he was immersed in all things quail, further cementing his interest in the tiny game bird. Utah State University called again a few months later, and he headed north again, this time to Rawlins, Wyoming, as a crew leader for a greater sage-grouse research team. Rolling Plains Quail Research Ranch brought him back to Texas again for an interim ranch manager position, where he gained management and leadership experience. He also continued to network and pursue his long-term goal of a graduate degree.

“I knew about the Borderlands Research Institute (BRI) at Sul Ross State University and had read that Dr. Ryan Luna was doing a considerable amount of quail research out here. He was at a wildlife conference I attended in 2018, and I made sure to connect with him. He told me to stay in touch and he would let me know when he has a project available.”

The stars aligned in late 2018, and Trey was accepted as a graduate student at BRI. Accompanied by his trusty bird dog, Cash, Trey headed to Alpine for the next chapter of his academic career.

“I was thrilled to be accepted, and all the experience I gained from the time I left A&M to the time I joined the Borderlands Research Institute prepared me extremely well.”

Trey’s research project examined parasite communities found in quail populations in the Trans-Pecos area of West Texas. Cash was his field research companion, and the canine’s ability to find birds was instrumental in collecting the birds needed for the study. Trey’s project proceeded as planned, and he was all set to defend his thesis in October 2020 when COVID-19 threw him another punch.

“I found out I was positive for COVID right before I was supposed to defend. I wasn’t feeling that bad, so we went ahead and proceeded with a virtual defense where I was sitting in my bedroom in front of my computer defending my thesis. That was odd, to say the least. But it went really well.”

And no doubt it will be a pandemic experience he will remember for the rest of his life. Trey has made a full recovery from the virus and is now looking ahead to his future.

“My goal is to move into a PhD position, but it is very challenging. I’ve been communicating with several schools for about a year now, but with the current political climate and the coronavirus, a lot of funding has been put on hold and there are not a lot of positions available right now.”

If Trey’s work experience and attitude are any indication, there’s no doubt he will land on his feet in a situation that will position him well for the next step in his career. 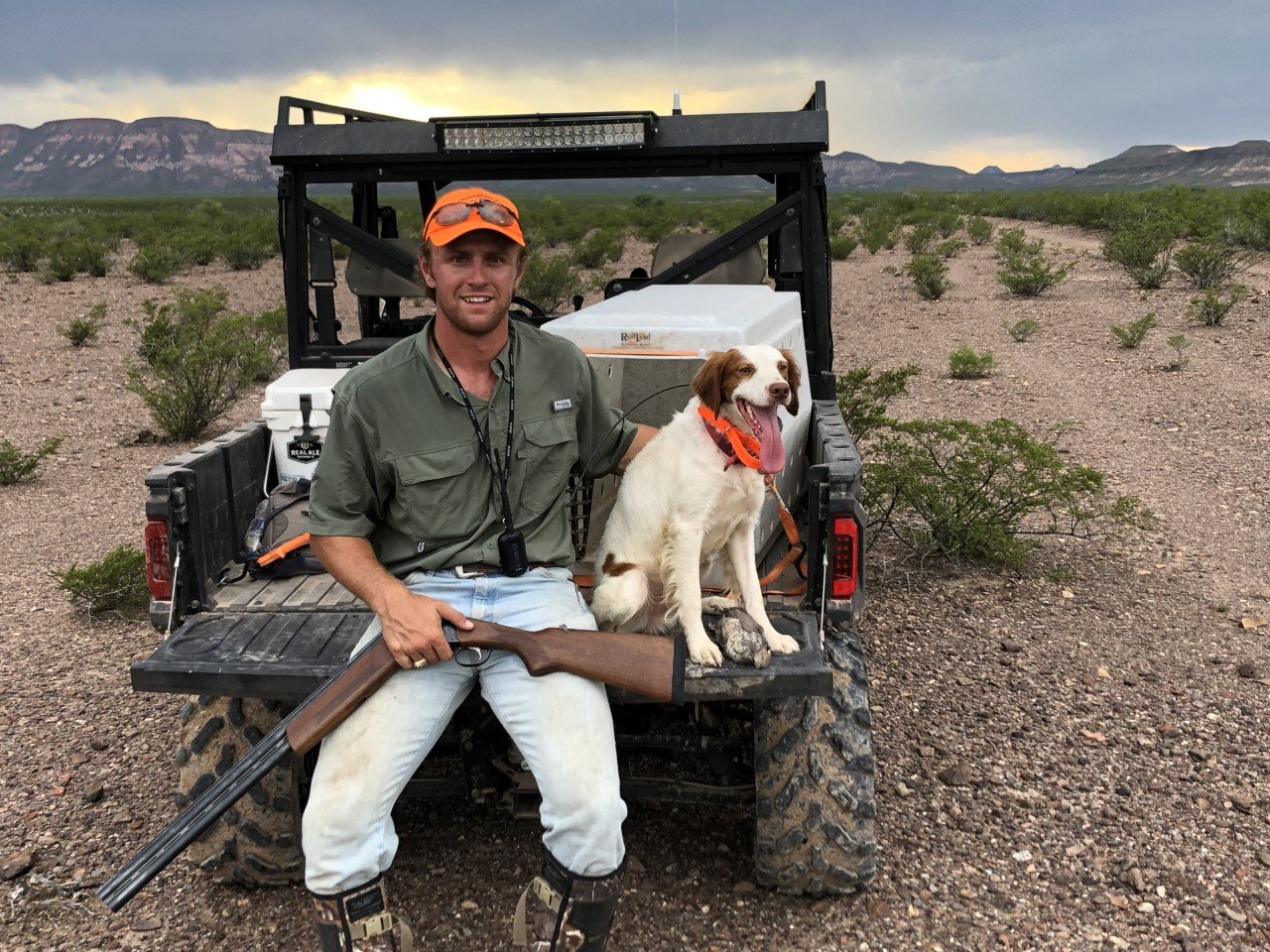 Trey with his bird dog, Cash, searching for quail. 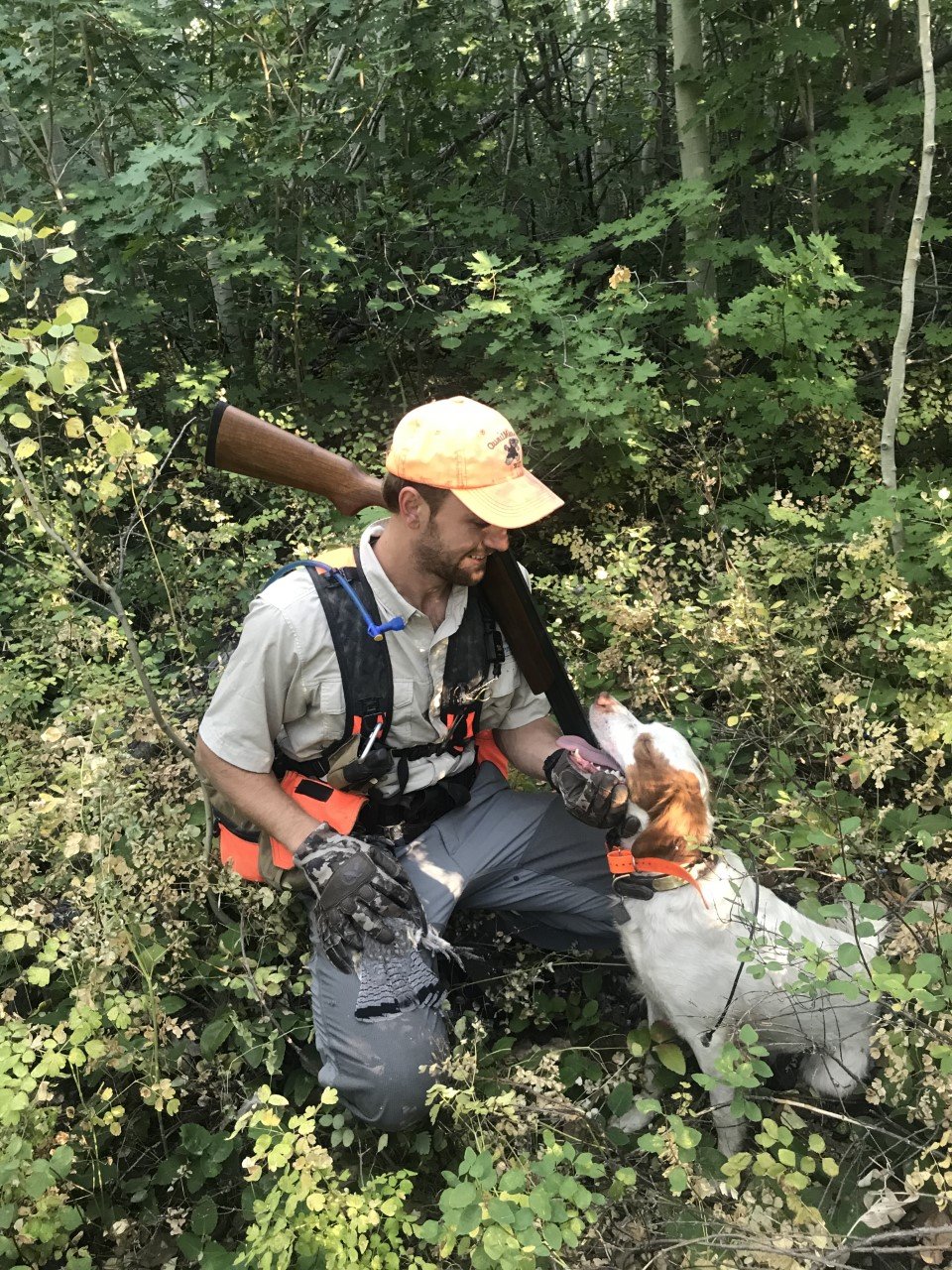 Cash’s ability to find birds was instrumental in collecting the birds needed for his thesis project.
November 9, 2020