Daniel Wilcox has always had an innate curiosity about how the world works and how natural systems work together. He grew up in Forney, Texas, hunting and fishing, and was also involved in FFA and agricultural-related pursuits all through high school.

He went to Tarleton State University for his undergraduate degree, the first in his family to attend college, and he enrolled as an animal science major. However, a lecture about the reproductive hormones and life cycle of sheep had him second-guessing his major.

“I remember thinking, ‘man, this isn’t for me,’” recalled Wilcox. “I switched majors to a general biology degree and wasn’t really sure what I was going to do with my life.”

A student speaker during a speech class changed the trajectory of his academic career. The speaker was a young man named Kelton Mote, who spoke to the class about techniques for aging white-tailed deer. Wilcox was entranced and introduced himself right after class. Mote told him about the student chapter of The Wildlife Society, and invited Wilcox to join him that weekend for a working field trip to South Texas.

“I was a little apprehensive, but decided I needed to put myself out there,” he said. “So, I went on that trip and let me tell you it was an absolute blast. There were helicopters flying around, biologists netting deer, and we helped hobble them and gather information once they were captured. And I knew that was it. That’s what I wanted to do.”

When Wilcox got back from the trip, he switched majors once again to study wildlife conservation. He and Mote became fast friends, and Mote encouraged Wilcox to get involved in The Wildlife Society. Wilcox took his advice, eventually becoming president of the student chapter at Tarleton.

He also became friends with some graduate students at Tarleton, which fostered an interest in research and a desire to pursue a master’s degree. He extended his stay at Tarleton for another year to earn a Geographic Information Systems (GIS) minor, to make himself as competitive as possible. He did some undergraduate research, worked at a consulting firm and did a couple of wildlife internships. Despite his interest and preparation, he didn’t make much headway when he began reaching out to grad schools.

“I applied to more than a dozen master’s positions, and couldn’t get a single interview,” he said. “I was pretty discouraged.”

So discouraged that he began making plans to join the Army. Right before he planned to enlist, he got a phone call from a grad student at the Borderlands Research Institute at Sul Ross State University. That led to an interview with Dr. Carlos (Lalo) Gonzalez and acceptance into grad school. Though he had an early academic aversion to sheep, Wilcox took on a bighorn sheep project for his thesis.

“It’s funny because when I first started college, I thought I wanted to be a veterinarian and it was a sheep lecture that caused me to call it quits on that,” Wilcox said with a laugh. “And then I come here and find myself reading a paper on the sheep reproductive cycle and how it involves hormonal shifts throughout the year. And I had a painful realization that somehow I made it right back to this subject.”

Wilcox is investigating the impact of aoudad expansion into native bighorn and mule deer range. He is analyzing the degree of overlap in space use and resource selection between the three species and assessing factors influencing their survival on a co-occupied landscape. Results from this study will shed light on the degree of concern that should be warranted regarding aoudad population growth in Texas.

He hopes to graduate in May 2022, and will be seeking employment in the wildlife conservation field for a few years before tackling his next goal, which is earning a PhD.

“I hope to eventually secure a place in academia as a professor working on large mammal ecology,” he said. “I’ve learned a lot about the science of biological invasions, like what is happening in West Texas with aoudad. I believe the next threat to global biodiversity, behind climate change, is biological invasions, and the reshuffling of the earth’s wildlife. It’s a big concept and there is lots to learn.” 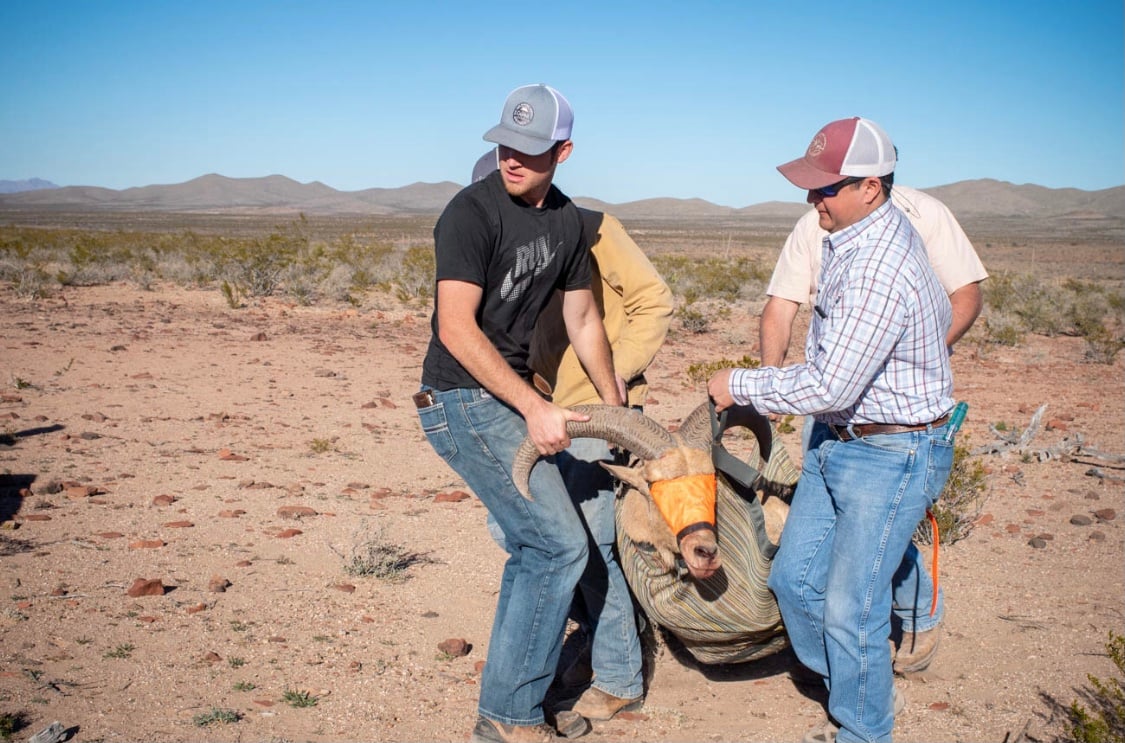