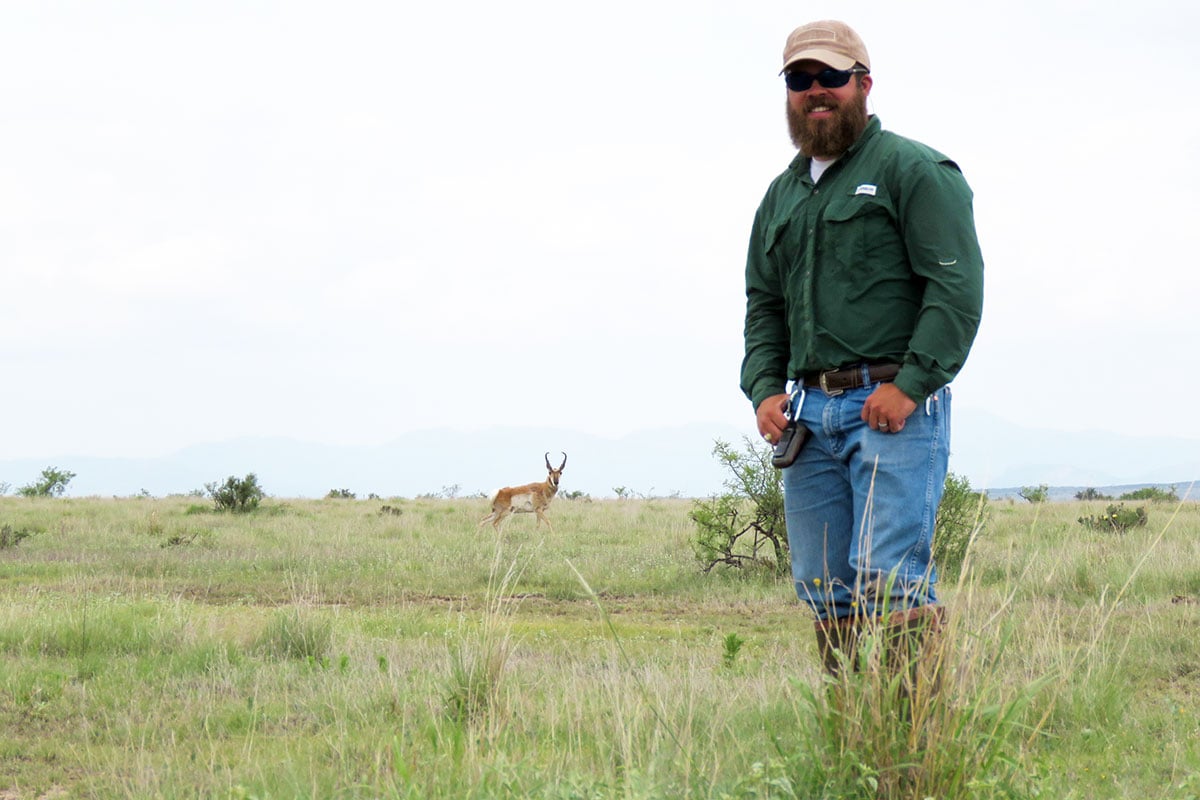 Graduate student Jacob Locke poses with a nearby pronghorn at one of his study sites on the Marathon Grasslands.

Early on, Jacob Locke learned something very important from his dad.

“Seeing his work life versus his life in the outdoors showed me that I did not want to sit inside of an office every day,” said Locke, reflecting on many childhood outdoor adventures they enjoyed together. “Seeing how much his stress was relieved by simply being outdoors and getting away from the corporate world really opened my eyes. I knew at a young age that I wouldn’t be studying business in college. I wanted to find a career choice that would keep me outdoors.”

Locke grew up in deep East Texas, hunting and fishing with his dad and grandfather. The natural curiosity inspired by being out in nature evolved into wanting to learn more about wildlife. When he learned about the option of becoming a wildlife biologist, he knew he had found the perfect career choice.

“My parents were a little surprised because nobody they know is a wildlife biologist and they did not know much about it,” he said. “But they supported me fully and told me to do what I love.”

After high school, Locke enrolled at Texas A&M and earned a Bachelor of Science in Wildlife and Fisheries Sciences, with an emphasis in Wildlife Ecology. He also earned a Certificate in Leadership Study and Development from the Hollingsworth Leadership Excellence Program through the Texas A&M Corps of Cadets.

Locke met Dr. Louis Harveson at a Texas Chapter of the Wildlife Society meeting during his junior year and learned about the Borderlands Research Institute at Sul Ross State University in Alpine. Harveson hired him as an undergraduate research assistant during his summer break. He worked on a grassland bird project, and that experience underscored his interest in wildlife research and the Borderlands Research Institute. During his senior year, Dr. Harveson approached Locke about an opportunity for graduate studies centered on pronghorn research. Locke jumped at the chance and enrolled immediately following his college graduation in May 2018.

Locke is working on a research project that is part of the Trans-Pecos Pronghorn Restoration Project. The Trans-Pecos Pronghorn Restoration Project is a multi-year public-private partnership with the Texas Parks and Wildlife Foundation. The project began in 2012, after Texas Parks and Wildlife Department (TPWD) biologists documented a precipitous decline in pronghorn population numbers. At least 17,000 pronghorn historically roamed the West Texas region, but by 2012 there were estimated to be fewer than 3,000. Borderlands Research Institute is playing a critical role in the project by coordinating with Texas Parks and Wildlife Department biologists to identify research questions that need to be answered.

Locke’s research project will help determine a carrying capacity estimate of the two main restoration areas for pronghorn, which are being translocated to West Texas from the Panhandle. His work is building on research projects from previous graduate students, adding to the scientific knowledge that informs management decisions for the restoration of pronghorn in the area.

“I feel incredibly privileged to get to do what we do,” said Locke. “Helping to bring back one of Texas’ most iconic big game species to its native range is a pretty cool feeling.”

Locke is about halfway through his project and will graduate with his master’s degree in 2020.