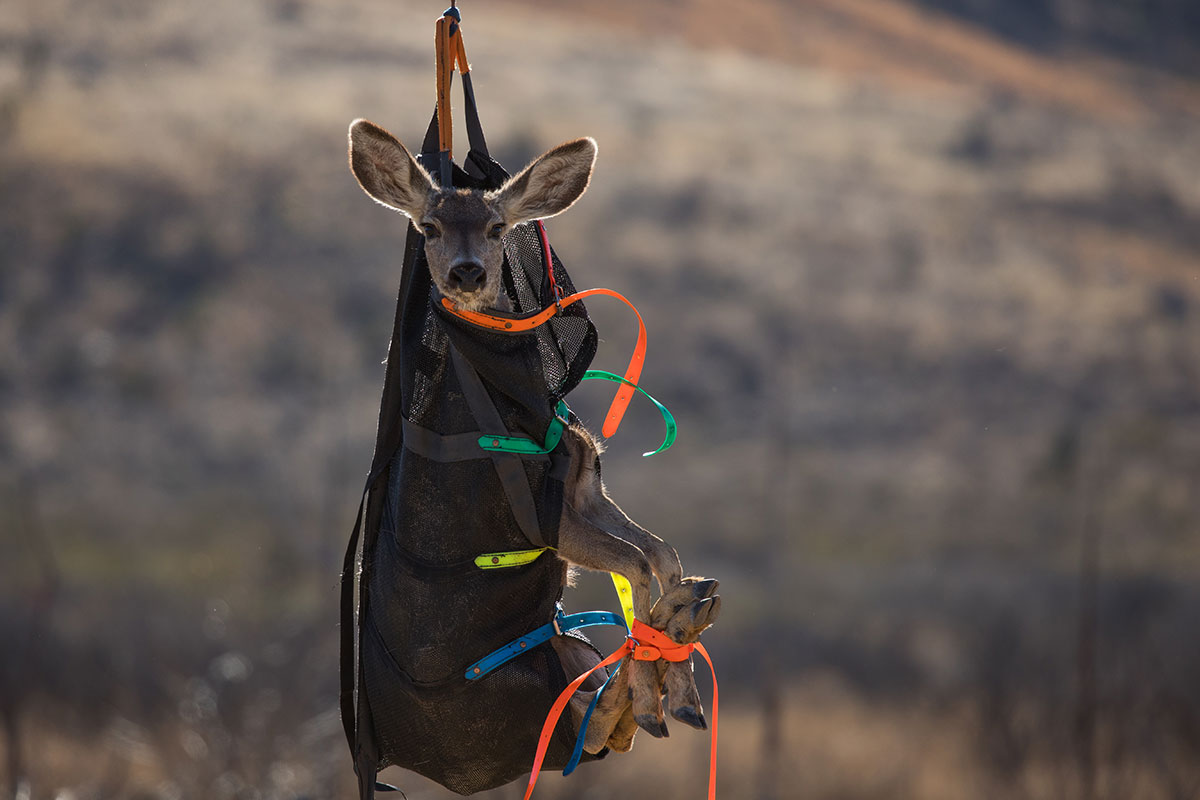 This colorfully wrapped mule deer doe was translocated as part of restoration efforts in West Texas. Mule deer were hobbled and slinged to keep them secure as they were moved from a healthy population to the Black Gap Complex, where mule deer numbers have declined in recent decades. Following translocation, this doe and others were tracked using GPS collars, allowing us to better understand movement, home range, and dispersal following release to the new sites.

Historically mule deer occurred across vast areas of Texas, residing across the Trans-Pecos, Panhandle and Edwards Plateau regions. However, this changed by the early-1900s when populations were isolated to just a few pockets in the Panhandle and Trans-Pecos regions because of changing land use practices, over-hunting, and urbanization. Since then mule deer populations have rebounded in most areas in the Trans-Pecos and Panhandle thanks to efforts from private landowners and Texas Parks and Wildlife Department (TPWD). Drought, habitat quality, disease, and predation are some of the factors that limit mule deer population growth. One such area of Texas that has fewer mule deer than expected is Black Gap Wildlife Management Area (BGWMA). During the 1960s this area’s estimated population ranged from 2,000–4,000 mule deer within the wildlife management area. In contrast, the estimated mule deer population was less than 200 individuals at the WMA in 2013.

In order to understand why mule deer numbers struggled, researchers with Texas Parks and Wildlife Department, Cemex (USA and Mexico) and Borderlands Research Institute conducted a restoration project in the BGWMA and a neighboring ranch. Our goal was to try to boost the mule deer populations at these locations with multiple translocation efforts as well as to compare different release methods for future translocations.

To conduct these translocations we followed TPWD’s Trap, Transport, and Transplant guidelines and pulled mule deer does from source populations that could support the removal of these does. The does were then fitted with VHF or GPS radio tracking collars and transported to two release sites.

These release sites make up the Black Gap Complex, which follows the Rio Grande just east of Big Bend National Park. The first portion of our complex was the BGWMA (103,000 acres). This release site was utilized for the soft-release pasture, which allowed us to keep the deer in the enclosure for two weeks to acclimate them to the new environment before opening the gates and allowing the deer to move freely across the landscape. Our second release site was at the Cemex-owned El Carmen Land & Conservation Co. (35,000 acres). This area was used for our hard-release site. A hard-release method is when the animal is released straight from the trailer into the environment without an acclimation period.

From 2015 to 2016, we translocated 116 mule deer does to the Black Gap Complex. Of these 116 deer, 96 were fitted with either VHF or GPS radio collars for monitoring following release. With these radio collars we were able to compare movements (home ranges, daily movements, etc.) and monitor survival following both release methods.

Mule deer in our soft-release cohort had home ranges varying from about 1,000–5,700 acres, while our hard-release cohort had a home range varying from 1,500–26,500 acres. Site fidelity followed a similar trend. We noticed a higher loyalty to release location in mule deer that were soft-released compared to hard-released. However, there were still large movements within both release methods: one mule deer doe moved about 42 miles straight-line from the hard-release site into Mexico and returned in a couple of weeks, while in the soft-release group, three individuals moved 20–30 miles north of BGWMA and returned within one week of leaving. These are just some of the large movements that we documented, along with multiple international movements into Mexico. The mule deer population at BGWMA was estimated at about 400 during fall 2017 surveys. As with all deer management, it is important to clearly identify your management goals prior to implementing a management strategy, as well as to evaluate your successes and failures.

This study occurred during 2015 and 2016 and involved CWD surveillance prior to translocating those deer. Nonetheless, because of serious concerns for the potential of CWD transmission, TPWD has since made the decision to cease all deer translocations to or from State-owned properties.