Michael Stangl’s journey to find himself led him into the Yukon wilderness in 2010 with the National Outdoor Leadership School. What he learned about himself and the wild environment led him to Alpine, Texas, and the Borderlands Research Institute (BRI) at Sul Ross State University.

“My experience in the Yukon helped me understand how to tread lightly through the wilderness,” said Michael. “In the face of that dramatic of an environment with no one around for hundreds of miles, I developed an immense sense of respect for the land and wildlife, and how delicately balanced everything is.”
The experience was life-changing and caused him to reconsider his life trajectory. He was working in the service industry in Austin and knew he wanted to make a change and get out of the city. He had heard about Sul Ross State University and applied for the 2011 fall semester. In the meantime, he accepted a summertime position at a backpacking summer camp in Durango, Colorado.

“I was on my way to Colorado when Dr. Patricia Moody Harveson called to tell me I had been accepted,” Michael recalled. “I pulled off the highway so I could focus on the call. She was interested in my backcountry experience and we also talked about the classes I should register for during the fall semester.”
As it turns out, that backcountry experience made Michael an ideal candidate as a BRI research technician during the last few semesters of his undergraduate career.

“The experience I had in the Yukon set me up perfectly for that project,” said Michael. “I knew I wanted to incorporate that backpacking experience somehow, and this was just perfect. I spent the better part of the year in Big Bend, hiking alone, checking cameras way off established trails. It was an incredible experience to spend that much time there and I developed a really special relationship with the land.”

Michael completed a Bachelor of Science degree in Natural Resource Management at Sul Ross in 2015 and is now working toward his master’s degree. The time spent as an undergraduate researcher on the mountain lion project, spending long hours in the backcountry, further piqued his interest in the majestic animal, about which little is known. His graduate thesis is focused on the ecosystem services of mountain lion predation in the Davis Mountains.

“It’s really rad work looking at mountain lions as apex predators,” said Michael with enthusiasm. “They don’t eat all of their leftovers, and the carrion they leave behind provides sustenance for many other animals. It really is a niche world in food web ecology, and I hope this thesis will shed light on how mountain lions service the rest of the wildlife community.”

While there was much field work that employed Michael’s backcountry experience, there’s another reality of the project that is not as much fun: watching hundreds of hours of game camera footage to document results.

“I’m just not hard-wired to sit in front of a computer,” said Michael with a laugh. “I swore to my mom that I would never have an office job, but here I am, glued to my computer!”

The thesis won’t be completed for a few more months, but there are a few anecdotal responses that might surprise some.

Michael’s initial findings have also demonstrated the mountain lion kill sites become a veritable buffet for a host of other animals.

“Field camera footage has documented that all sorts of small mammals visit the kill site,” he said. Ringtails, spotted skunks and striped skunks are frequent visitors to these sites. The carrion also attracts bugs, which in turn attract songbirds. It’s a microcosm of activity.”

Michael’s thesis will be completed soon, and he expects to graduate in 2019. He’s not sure what’s next for him, and true to form, he hopes to find the answer in the wild.

“I’m going to take an 800-mile backpacking trip in the early summer of 2019,” said Michael. “It just seems like something I ought to do, so we’ll see how it goes. And after that, maybe a bit of bicycle touring. We’ll just play it by ear.” 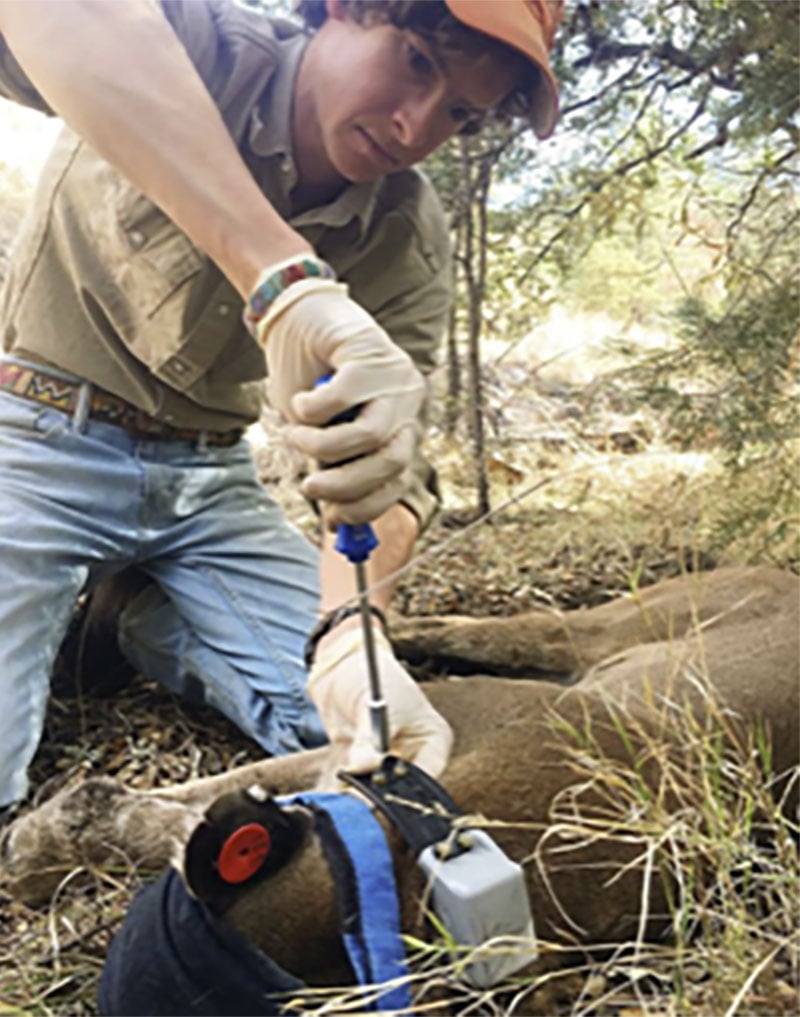