Froylan Hernandez loves his job. As Desert Bighorn Sheep Program Leader for Texas Parks and Wildlife Department (TPWD), Froylan leads one of the most successful wildlife conservation efforts in Texas. He holds a coveted position that many wildlife biologists might spend decades aspiring to. Stationed in Alpine, he is surrounded by some of the most ruggedly beautiful terrain in Texas. The way he tells it, how he ended up here wasn’t part of some grand plan.

“I’m in this position, not by design, but default,” he chuckled. “It seems like over the course of the last three decades, whenever there was a fork in the road, I would flip a coin to determine which direction I would take. I am extremely grateful my path has led me here.”

He grew up on a ranch near Brackettville, where his father was a ranch foreman. Right out of high school, he joined the Marine Corps and served his country from 1986 to 1990. After his discharge, he followed in his father’s footsteps, working in the ranching business. But as a few years went by, he realized other opportunities existed. With the clock ticking on his G.I. Bill benefits, Froylan began exploring higher education options.

“I visited with a counselor at Texas A&M, and went down the list of degree options,” he recalled. “When we got to “Wildlife,” I knew that was it. I enrolled and loved it from the very beginning.”

He worked two jobs while going to school to avoid student loans. After he graduated from Texas A&M in 1999, he learned about a job opening at Sul Ross State University, and met Dr. Louis Harveson, who would become his boss, his mentor, and his friend. He also did an internship at Elephant Mountain Wildlife Management Area (WMA), which exposed him to Texas Parks and Wildlife Department projects and people, including Mitch Lockwood.

Harveson and Lockwood convinced Froylan to pursue a master’s degree, and once more facing a fork in the road, Froylan enrolled at Sul Ross State University. He did his thesis work on Montezuma quail at Elephant Mountain WMA, and after he graduated in May 2005, he took a research associate position at the Caesar Kleberg Wildlife Research Institute in Kingsville.

In 2005, Froylan was hired as assistant manager of Elephant Mountain WMA. He was immersed in work involving desert bighorn sheep from the very beginning of his TPWD career. Elephant Mountain was donated to the state primarily for bighorn sheep conservation and, along with the Sierra Diablo and Black Gap wildlife management areas, has been a focal point for research and restoration efforts of the majestic big game animal. In 2010 he was selected as Desert Bighorn Sheep Program Leader by his new boss, Mitch Lockwood.

Throughout his TPWD career, Froylan has maintained close ties with the students and faculty at Sul Ross and has observed the growth of the Borderlands Research Institute (BRI) at Sul Ross State University over the last decade.

“BRI research projects have really assisted us in developing effective management plans for desert bighorn sheep and other species,” he said. “We just don’t have the bandwidth to do all the research that is necessary for us to make the best science-based decisions. Wildlife research is what BRI is all about. It’s a great partnership.”

Froylan and his team are in the throes of creating a new hunting permit system for bighorn sheep. The old methodology has become obsolete as desert bighorn sheep populations have grown and spread across mountain ranges in West Texas. The new system will be based on the latest scientific research about habitat modeling, a direct result of Borderlands Research Institute projects.

“It’s been gratifying to watch the growth of Borderlands Research Institute,” said Froylan. “In just a few short years, BRI has established itself as very competitive with other research universities doing similar work. We look forward to a long and productive partnership with BRI students and faculty to benefit wildlife in West Texas and beyond.” 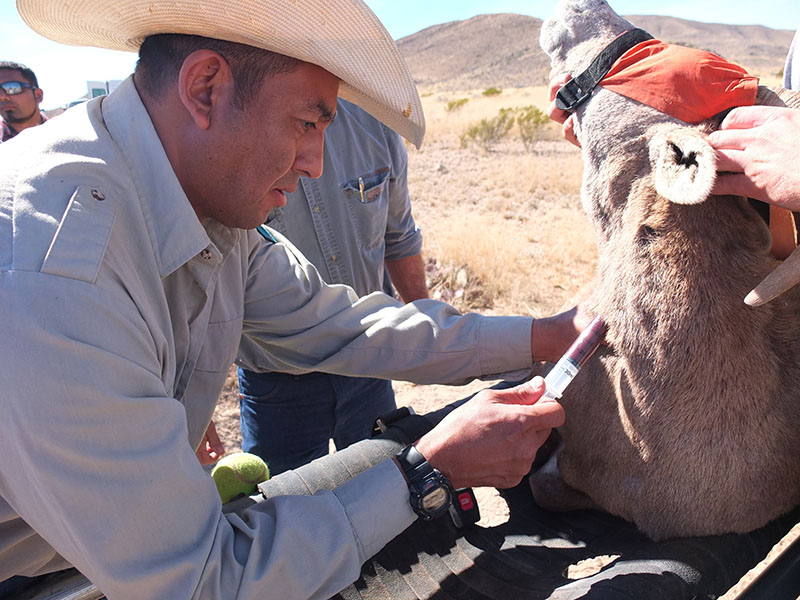