“I got interested in environmental issues at a young age because of the water problems in Chihuahua,” she explains. “It’s a city of almost a million people, and even today we only have water for six hours a day. That opened my eyes to the importance of natural resources.”

Denis applied that early interest in the environment to her college experience, earning a bachelor’s degree in Ecology in 2009 from the Universidad Autónoma de Chihuahua.

Her first job out of college had her designing and implementing environmental education programs for school children. She continued to build her resume over the next few years, working for New Mexico State University and the US Forest Service, monitoring burrowing owl nests in prairie dog towns. In September 2010, she accepted a position with the Mexican federal government and the United Nations Development Program, supervising and implementing water and land conservation projects as well as conducting environmental education within rural communities. From there, she worked a variety of positions as a volunteer and field technician for various non-government organizations, including The Nature Conservancy, Profauna, and the Bird Conservancy of the Rockies. In her last position, she assisted with a long-term avian monitoring project on private land in the Chihuahuan grasslands during winter. It was that project that led to her enrolling at Sul Ross State University in 2016.

“I had heard about the Borderlands Research Institute (BRI) through my professors at the university in Chihuahua,” she said. “I knew I wanted to get a master’s degree, and when I found out about the BRI project involving grassland birds, I knew this program was for me.”

For her thesis project, Denis is studying wintering grassland birds in West Texas. Populations of grassland birds that winter in northern Mexico and the southern United States are declining more than any other bird group in North America, but the cause of this decline is poorly understood. Habitat loss and degradation are thought to be the main factors. Denis and a team of another grad student and three technicians are monitoring the movement and survival of Baird’s and grasshopper sparrows on a site near Marfa. BRI is partnering with Texas Parks and Wildlife Department, Bird Conservancy of the Rockies and the Dixon Water Foundation on the project.

“Capturing these birds is pretty labor-intensive, and we couldn’t do it without volunteers,” said Denis. “We have more than 100 volunteers who have worked on this project.”

Field research includes setting up mist nets and then flushing the birds as the students and volunteers walk through the grass. The tiny birds don’t like to be seen, so they won’t flush until there’s a disturbance very close to where they are hiding. Once they flush into the mist nets, Denis and her team work quickly, taking measurements and recording data, and place a tiny band and transmitter on them. After that, Denis and her team track the birds once per day to determine if they are alive or dead and document the ground cover and habitat conditions where the birds are tracked. The batteries on the transmitters last between 45-50 days, so in the middle of the season, the birds are re-captured so that the transmitters can be switched out.

“We will complete the study in March 2018 and I will be writing up the results as my thesis,” said Denis. “Preliminary results indicate that the home range of both species is similar, and they prefer to utilize areas with more grass cover and less bare ground.”

Once the study is complete, results will be shared with land managers in the region to help guide grassland management practices. Denis expects to graduate in December 2018 with a Master of Science in Range and Wildlife Management.

“I’ve had a great experience here,” she said. “The professors are so supportive, and I’ve enjoyed meeting so many people with similar interests.”

Denis hopes her next job will keep her working in the Chihuahuan Desert that she loves.

“My dream job would be to continue working in this environment, either in the U.S. or back home in Mexico. I would love to work for a nonprofit conservation organization and be a bridge between each country.” 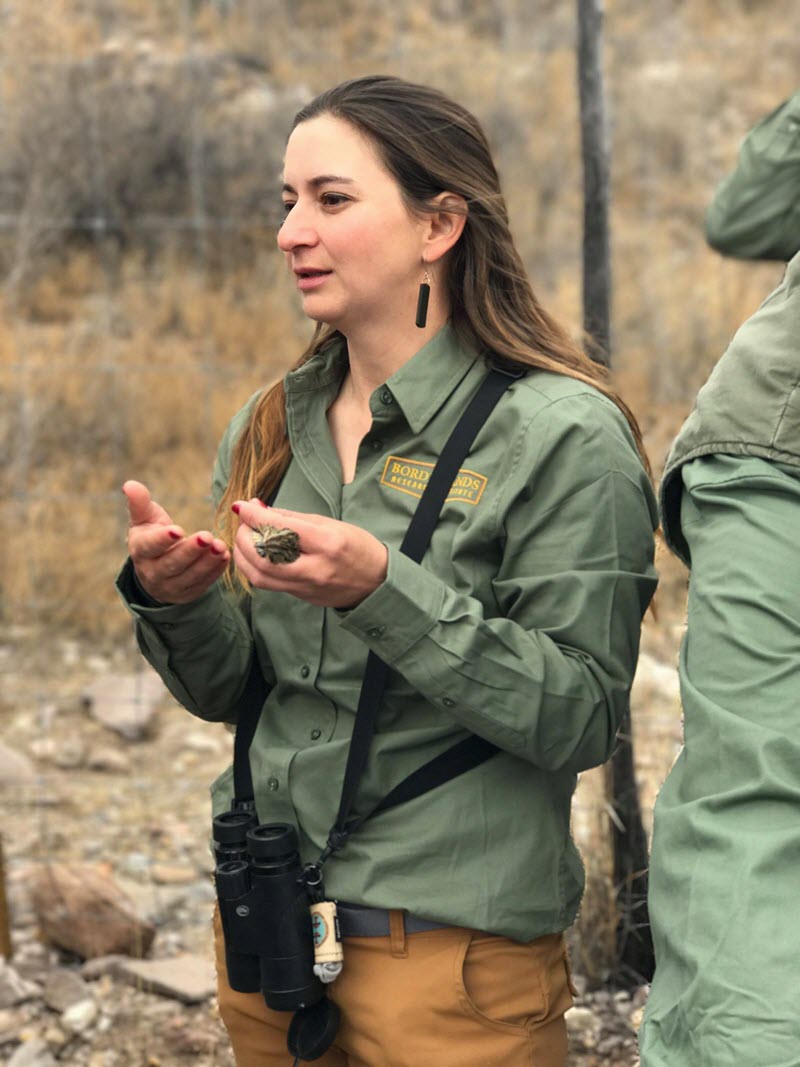