Airlifts have Texas Pronghorn on the Rise 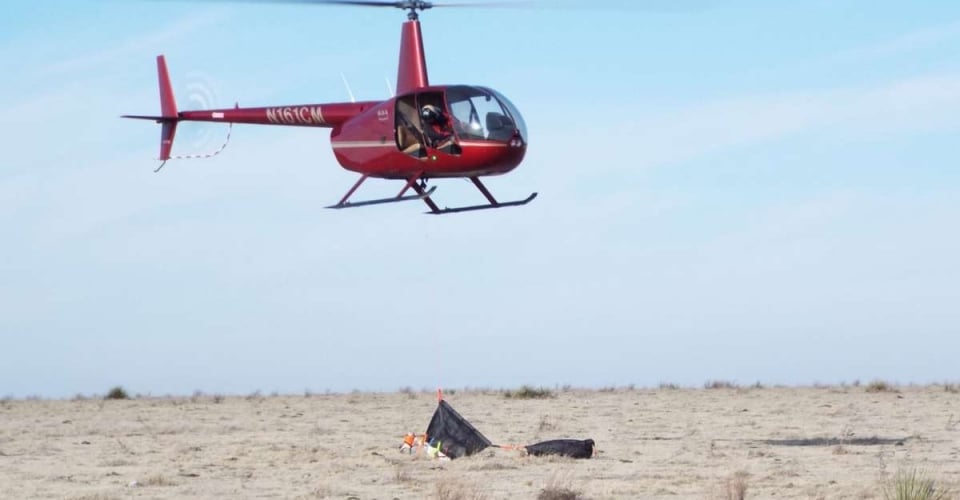 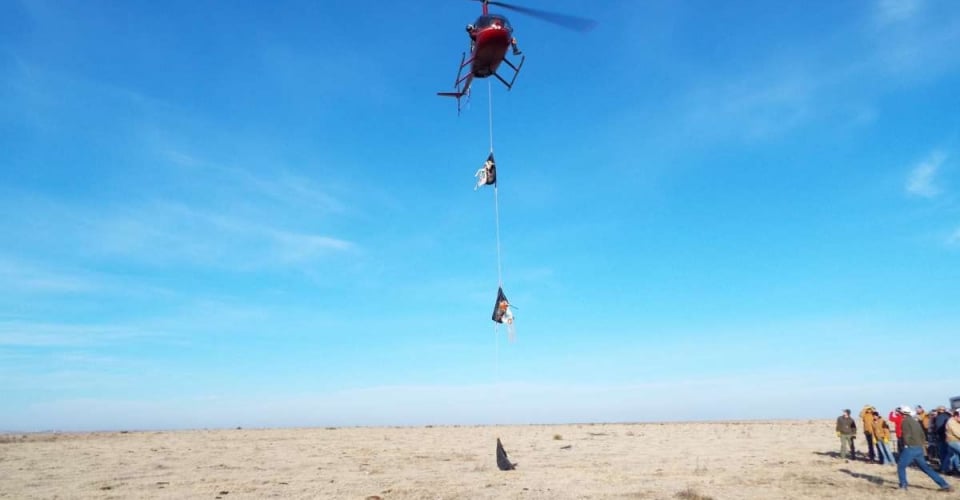 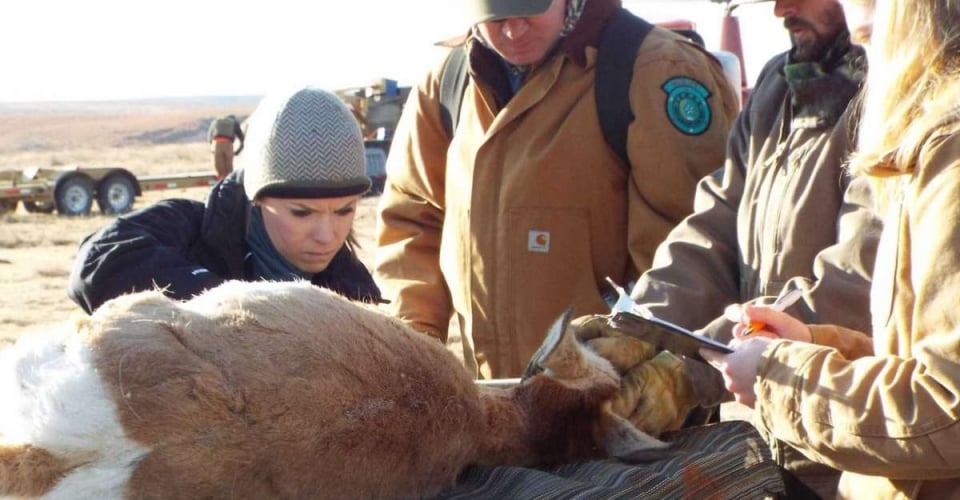 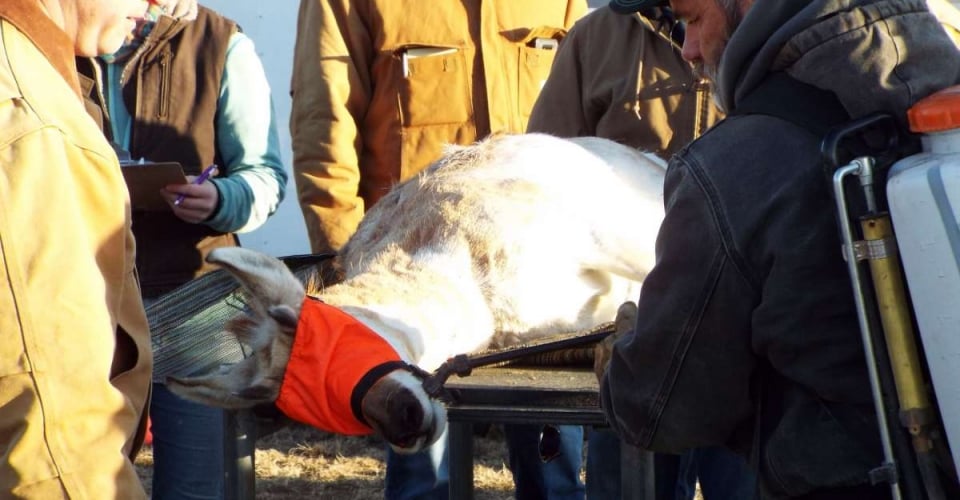 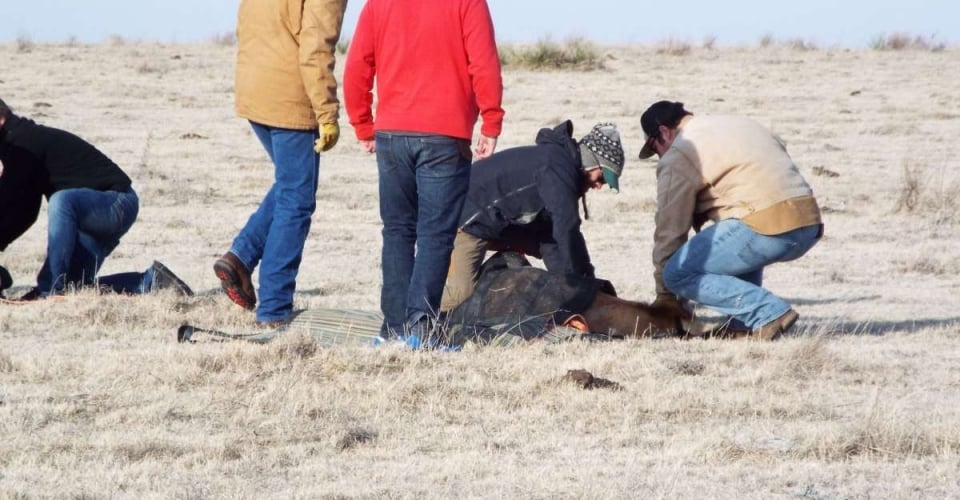 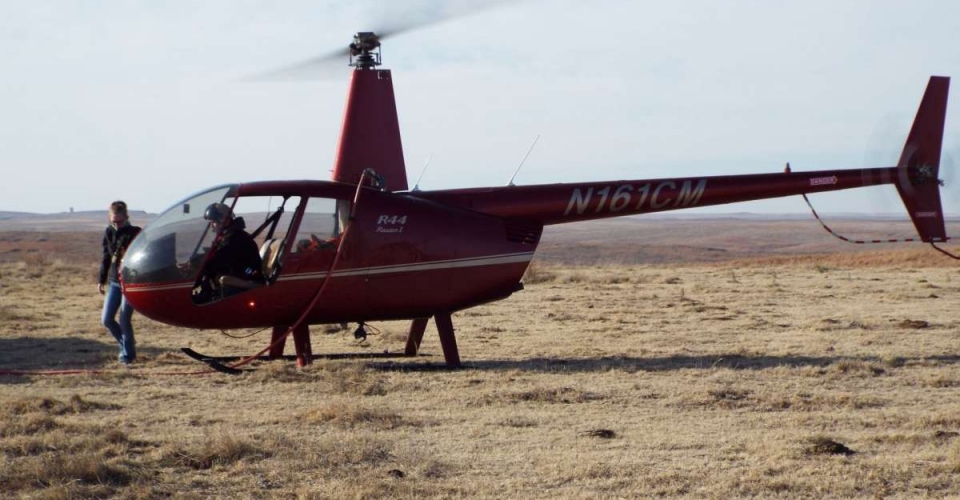 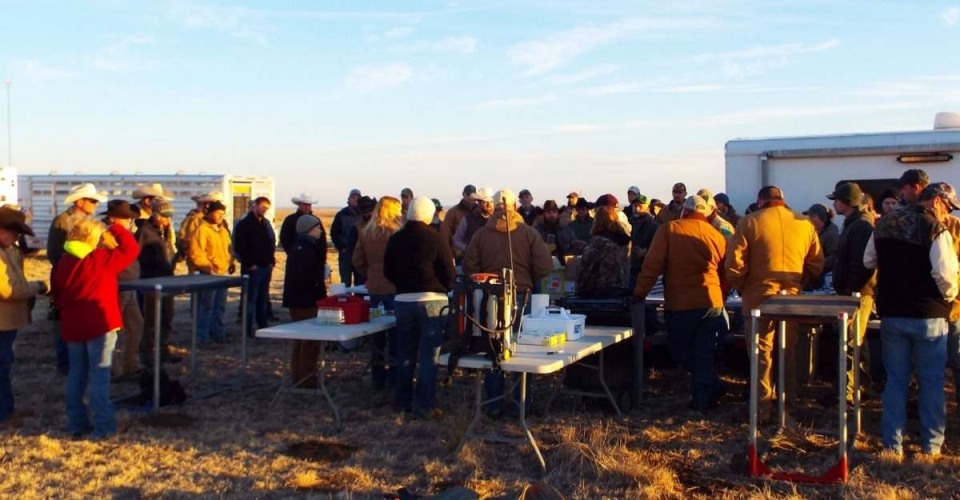 PAMPA — The panoramic horizon was broken by a red Robinson R44 helicopter. Below it, precious cargo. Two of the Chisum Ranch’s many pronghorn dangled under the chopper like wind chimes.

The pronghorn came in for a soft landing, and a group of wildlife professionals quickly huddled around them.

Both animals were picked up and ushered to nearby tables. There, wildlife specialists and veterinarians went to work.

The workers toiled in hushed tones as to not spook an animal that is highly sensitive even when it hasn’t just taken a wild ride in the sky.

Age and sex were documented, blood samples taken. Each pronghorn was given an ear tag and fitted with GPS collars. The animals were given water along with a spate of immunizations. Antibiotics, a long-term dewormer and a mix of vitamins were administered to give the pronghorn a boost while heading to their new home.

The two pronghorn were loaded onto modified trailers, where they would await more of their own.

This process was repeated over the course of three days in late January. Texas Parks and Wildlife officials, biologists, veterinarians, researchers and students from the Borderlands Research Institute, private landowners and other professionals assisted with the capture and relocation of 110 pronghorn from the Panhandle to the Rocker b Ranch near Barnhart, just southwest of San Angelo.

Pronghorn relocation projects have been going on for nearly a decade in the West Texas Trans-Pecos region, but this was the first restoration operation made to the Rocker b, a 180,000-acre cattle ranch on the western Edwards Plateau. Pronghorn restoration efforts have been highly successful in West Texas, and the hope is to continue that trend at the Rocker b.

“Pronghorn are probably one of the best examples we currently have for restoration,” said Lalo Gonzalez, the Nau Endowed Professor of Habitat Research and Management at Borderlands Research Institute.

An isolated herd, the Rocker b population represents the easternmost extent of pronghorn distribution. That herd has seen tough times lately.

The Rocker b historically had pronghorn, and lots of them. The ranch, owned by the Scottish Rite Hospital for Children in Dallas, once had over 2,000 and was a source for pronghorn relocation projects in the 1970s, ’80s and ’90s. It is the Rocker b’s turn to receive pronghorn now, with its population down to about 200.

Brush encroachment is to blame for the challenges pronghorn have faced on the Rocker b. An intrusion of thick mesquite has diminished the open habitat that pronghorn require.

“Habitat is top priority. Without habitat improvement, populations are simply not going to increase. Pronghorn are very, very picky on the type of habitat they utilize,” Gonzalez said.

Each area of the pronghorn’s domain in Texas — the Panhandle, Trans-Pecos and Rocker b — is different from the others, but they all look like scenes out of John Wayne movies. The vast, treeless blanket of open range is the habitat on which pronghorn thrive.

Bulging eyes, the biggest of any of North America’s hoofed animals, are the greatest asset for pronghorn on the open plains. Pronghorn can see the slightest of movements from predators for miles, sending them flying from danger with the incredible speed of the fastest mammals on the continent. It is why pronghorn are perhaps the most challenging pursuit of all big-game species.

Brush undermines all of this. Pronghorn can’t see around it, which takes away the animal’s biological advantage.

First the habitat shrinks, then the forage, then the population.

Fences, too, can cause problems for pronghorn. The animals are not adept jumpers, so fences fragment their habitat. Travelers in West Texas sometimes can see them standing along the highway fence line and gazing at the unattainable beyond.

The Rocker b has worked diligently over the past several years to remedy these issues.

Thousands of dollars have been poured into brush management. Thousands of acres of mesquite have been sprayed with herbicide and removed by tractors. Fences have been modified to allow for easier pronghorn passage by lifting the bottom strand of wire about 18 inches so the animals can pass under.

A group of 20 resident pronghorn were collared with GPS trackers at the Rocker b last year to better understand these issues. Of the 110 brought in from the Panhandle, 45 also were wearing GPS collars.

“It’s just awesome. The fact that we are able to move pronghorn,” said Locke, whose master’s studies focus on the species.

Locke grew up near Nacogdoches, far away from any pronghorn. But his fascination with the west and the distinctive landscapes and wildlife it holds led him to his involvement with pronghorn-toting helicopters on a chilly winter morning in the Panhandle.

His research with Gonzalez, his adviser, involves identifying carrying capacity in restoration areas of the Trans-Pecos region and a comparative study of cattle grazing techniques and how they impact pronghorn forage production.

Locke was in awe of the magnitude of working with the animals up close, and his time in Pampa was a professional milestone.

Locke might be a little biased, but he has plenty of evidence to back that up.

In fact, the only remaining member of the Antilocapridae family is more closely related to the giraffe than any of the latter.

The image of pronghorn on the open plains is mesmerizing. They’re a blur of sandy fur splotched with white bellies, sides, throats and rumps. Adult males are regal with short, black horns mirroring dark faces and cheeks.

The namesake horns are truly one of a kind. When looking directly at you, the outline of the buck’s horns can take the shape of a heart. Their composition, too, is unorthodox. The horns are made of sheaths of keratin, like true horns, but shed every year like a true antler.

One of Mother Nature’s countless anomalies, pronghorn are still as baffling to look at today as when Lewis and Clark stumbled upon them over 200 years ago.

Pronghorn provide a visual conduit to the past; another important reason why preserving Texas herds today is so important.

The current Rocker b project is an extension of the pronghorn restoration efforts that have taken place in the Trans-Pecos region since 2011.

Texas Parks and Wildlife, the Borderlands Research Institute, the Trans-Pecos Pronghorn Working Group and other groups are committed to reversing this trend. The collaborators have moved about 750 pronghorn from the Panhandle to grasslands near Marfa and Marathon over six separate relocations from 2011 to 2018.

Conservationists have worked to combat numerous issues that have contributed to population decline in the Trans-Pecos. Some of the issues were similar to those at the Rocker b, such as habitat loss, fragmentation and accessibility issues because of fencing.

Other issues were more localized, such as predation and disease. Problems with the Barber’s pole worm, an internal parasite, were exacerbated by drought and restrictive fencing that kept pronghorn from freely moving about the range.

The work over the past several years in the Trans-Pecos has pronghorn numbers back on the rise. Gray said the population is now 5,000-6,000, roughly halfway to the department’s goal of 10,000.

“We’re doing something right,” Gonzalez said. “For the past 20 or 30 years, you’ve seen those populations do nothing but decline until we initiated pronghorn restoration efforts. Then you started seeing the populations shift to an upward trend.”

The project is a testament to what can be accomplished with the bridges built between private landowners and state agencies, both committed to preserving an emblem of the West.

“We’re making gains. I can’t say enough about the cooperation of the local landowners and local communities,” Gray said. “Everybody’s all in.”

Relocations were not attempted in the Trans-Pecos the past two years because of dry range conditions. The Trans-Pecos project is set to resume with a relocation to the Van Horn area next year if weather conditions allow.

In the meantime, those invested in Texas pronghorn hope the restoration success seen in the Trans-Pecos will replicate at the Rocker b.