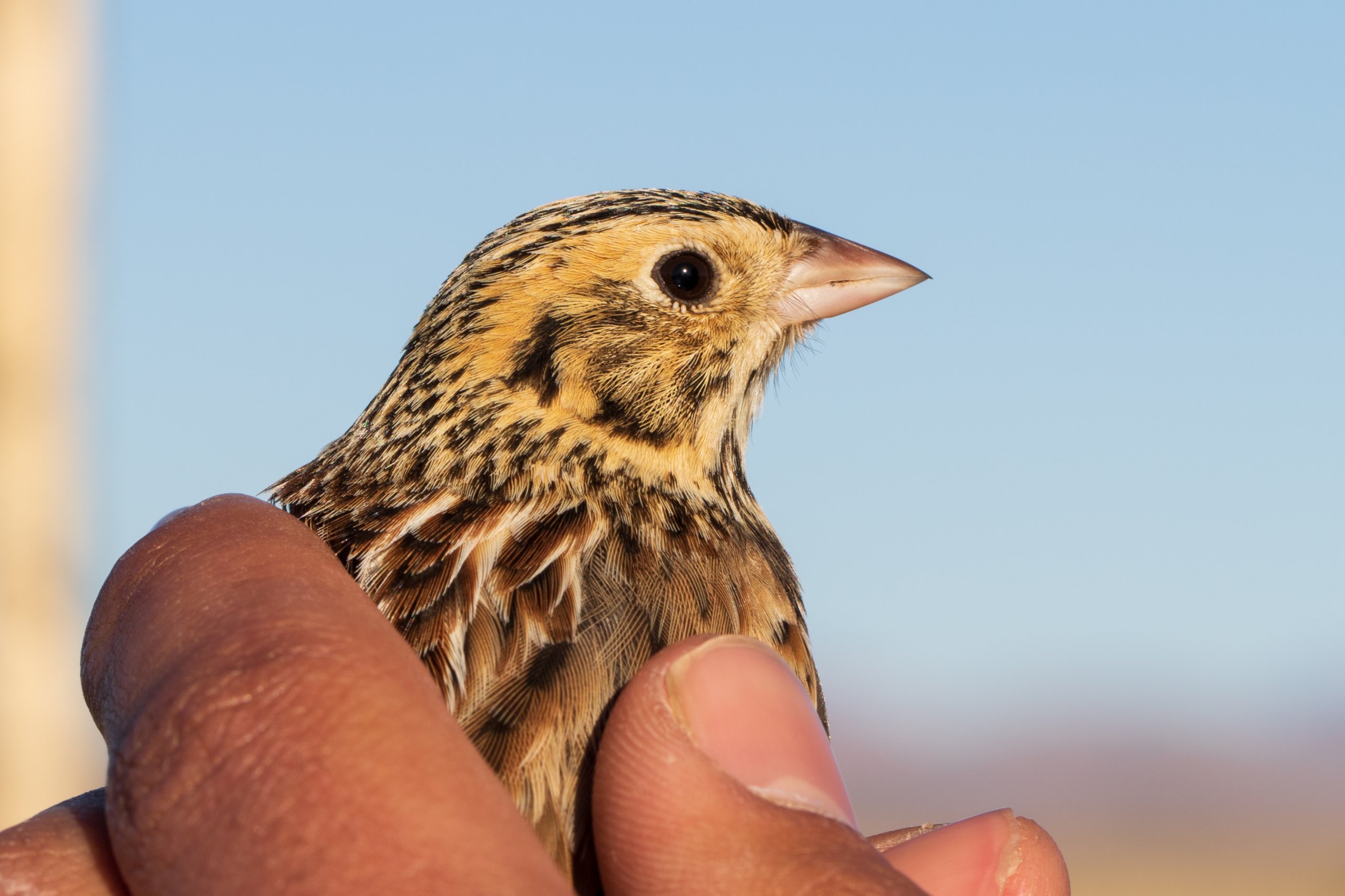 Overwinter Habitat Use of Baird’s and Grasshopper Sparrows in the Marfa Grasslands, Texas

Baird’s Sparrow (Centronyx bairdii) and Grasshopper Sparrow (Ammodramus savannarum) are migratory grassland birds that exhibit steep declines in their population with -2.6% and -2.8% annual decline, respectively. Habitat plays a crucial role in the persistence of grassland birds, because of this, the objective of this project was to evaluate overwinter habitat requirements of the two species in the Marfa Grasslands, Texas.

Throughout the winters of 2016–2019, 217 grassland birds were captured and fitted with Very High Frequency radio-transmitters to track their movements. Vegetation was assessed in bird locations and across a grid of evenly spaced points throughout the study site, using a 16.4 foot radius circle to estimate percent of vegetative cover and height. Additionally, we collected soil samples to estimate seed availability in the soil seed bank at bird and random locations in two grazing systems (rotationally and continuously grazed), and we used temperature loggers (iButtons®) to record microclimate data. An eBee drone was used to map the study site using a multispectral camera with four bands (Red, Green, Blue, and Near Infrared). The resulting orthomosaic was used to estimate NDVI and to perform a pixel-based image classification and compare the results on vegetative cover to visual surveys.

We found that Baird’s and Grasshopper Sparrows favor areas with more grass height and grass cover. Additionally, Baird’s Sparrow avoided areas with tall shrubs, presence of Salsola sp., and forb cover. After analysis of the soil seed bank, we found that birds select areas with higher seed biomass in the rotationally grazed pasture, but not in the continuous. Based on microclimate data, we found that bird locations and random locations did not have a significant difference. However, there was a difference in temperature mean, minimum and maximum among vegetation types. In fact, minimum temperature was lower in short grass and litter compared to tall grass, or shrub, which exhibited the highest minimum temperature. Mean temperature was also higher at shrub locations and lower at locations with short grass. Furthermore, maximum temperature was higher in places with tall grass and lower in places with shrub, but with more variation.

There was a slight but significant correlation between NDVI and seed biomass, and when adding NDVI values to a resource selection function, birds appeared to be selecting areas with higher NDVI values. A paired t-test determined that there was significant difference in the estimated percent of cover types between the two vegetation survey methods (drone imagery vs. visual surveys).