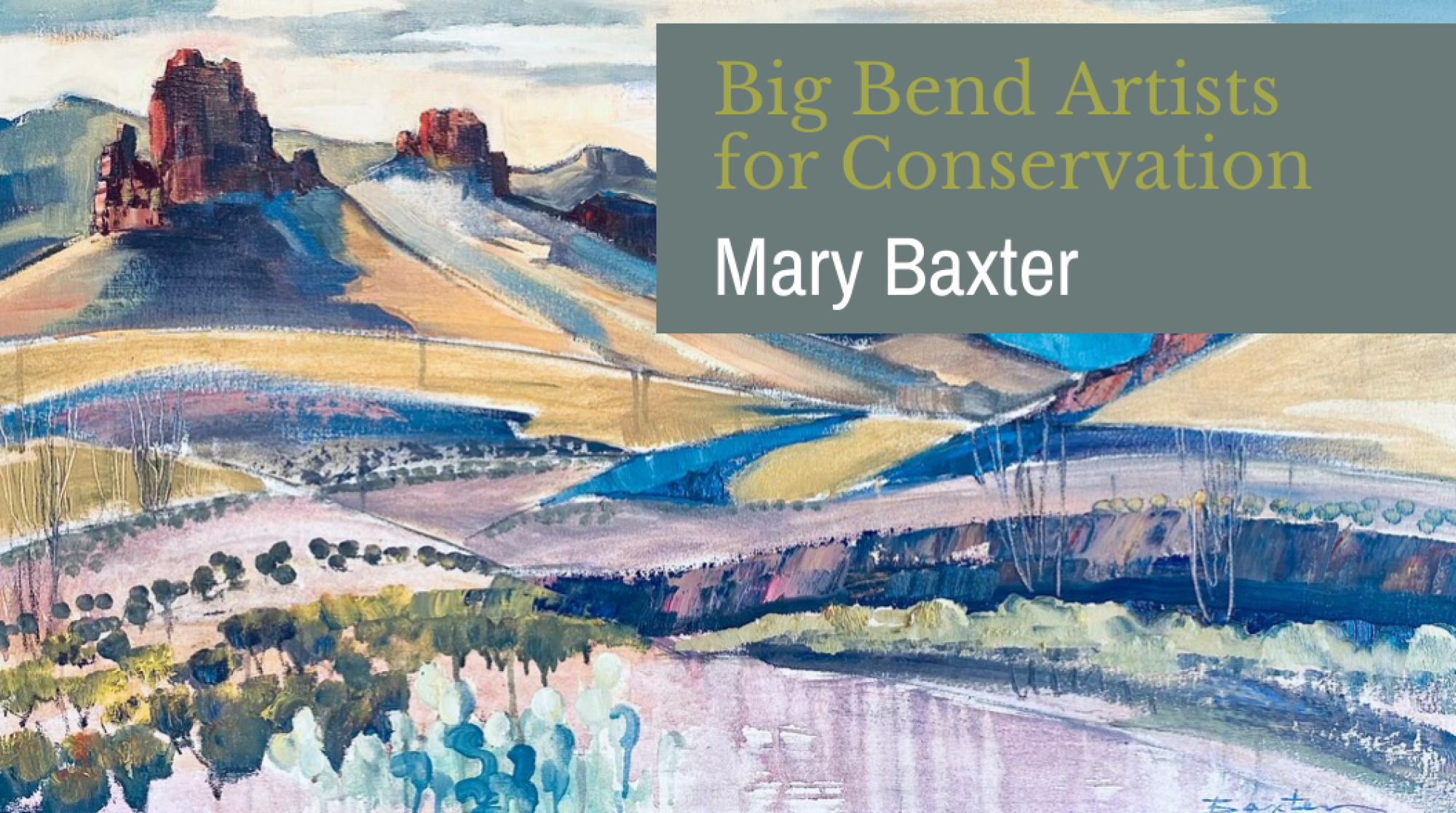 For more than three decades Mary Baxter has made a living as a successful artist, producing hundreds of works inspired by the desert landscapes of West Texas. She has always been interested in art, but after she graduated from college, she didn’t think it could be a viable career.

She grew up in San Antonio, with a love of horses and the ranching lifestyle. As a young woman she moved with her partner to a ranch south of Marfa, running cattle on a grass lease. That’s when her artistic spirit was re-awakened by the desert beauty around her.

“I just began to really see the landscape,” she said. “At first it struck me as harsh because it was so different than what I was used to, but it really grew on me. So, I began to do some paintings just for fun.”

A friend owned an art gallery in Alpine and offered to display her first paintings.

“I was really surprised that they sold pretty quickly. I did some more and she sold more and it kind of went from there.”

Her success allowed her to free herself of ranch duties and devote herself to painting fulltime. The landscape that was her muse remains her inspiration.

“It never ceases to inspire because it’s just constantly changing. I can take a walk every evening and it seems like every single day I find something new, a different plant or a different bug that I’ve never seen before.”

Baxter’s work has been showcased in galleries across Texas, including her former gallery and studio in Marathon.

“I can’t tell you how many lifelong Texans would come in and it might be their first trip to the Big Bend region, and they were always so surprised. They just had no idea. And it is always fun to hear their delight at discovering the beauty of this part of Texas.”

Baxter likes to work in the field and has spent a lot of time in a travel trailer as an invited guest on ranches across the Trans-Pecos.

“I don’t like to work from photographs, and prefer to really immerse myself in a place for several days or even longer so I can see it in a different light at different times of the day. The longer I stay in a place, the more it unfolds and reveals itself. And that’s always fun.”

She’s best known for her landscape work, but is also fascinated by the wildlife that calls Big Bend home. Recently, she was working on a piece near the Chinati Mountains that was commissioned for the upcoming 2023 Centennial of Texas State Parks and found herself distracted.

“I was painting a landscape looking off to the west and I was hard at it. And then I noticed this jack rabbit was not too far away. It was really hot, and he obviously didn’t want to move. I don’t think he had been bothered by a person before, and he just stayed there the whole time. I couldn’t help but paint him.”

She also finished up her piece on the Chinati Mountains, which will be part of an art exhibit celebrating the 100th anniversary of the Texas State Park System in 2023. Baxter is one of 30 artists chosen for the project, and the work will be featured in a book from Texas A&M Press and a traveling exhibit that will be displayed at museums across Texas.

As she continues to be inspired by the landscapes and ranches of West Texas, Baxter is grateful for the work the Borderlands Research Institute (BRI) is doing to protect what she loves.

“I’m a huge fan of what the Borderlands Research Institute is doing to learn more about the wildlife in West Texas. I really love what they are doing as the go-between between private property owners, ranchers and conservationists. Everyone who loves the Big Bend region benefits from their work.”

The Borderlands Research Institute is pleased to feature the work of artists who are inspired by the landscapes and the wildlife of West Texas. A new initiative called Big Bend Artists for Conservation aims to inspire conservation through art, and Baxter is pleased to join the group of featured artists.

“It was an honor to be asked and more importantly, I would do anything I could to help further their mission and get the word out about them. It just gives me a feeling of hope to be involved with so many people that love the land as much as we do. I’m just thrilled to be part of it.”

Learn more about Mary Baxter and her work at baxtergallery.com. 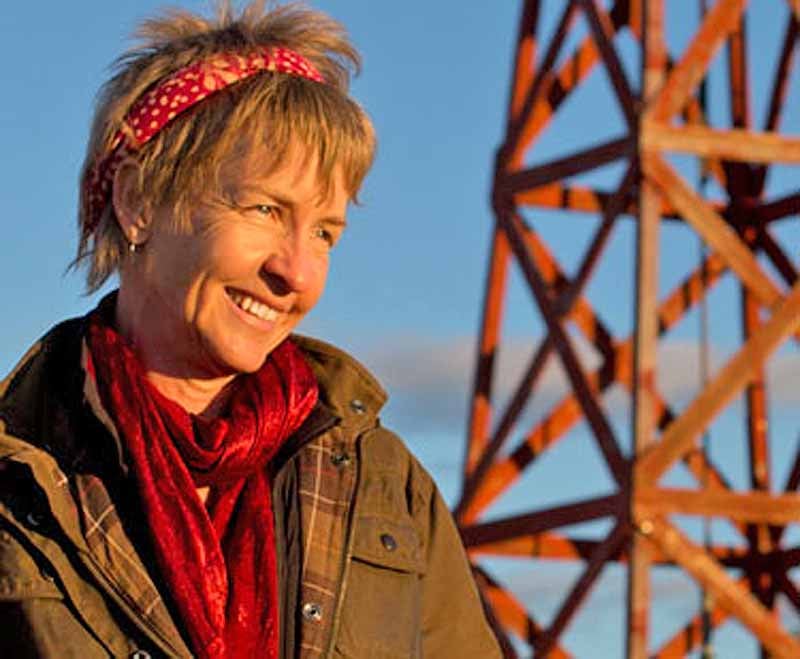 “Early in my career while I painted this area, I also supported myself training and trading horses, and sometimes working a season on the high-goal polo circuit in Florida or California. Now I’m able to paint and sculpt fulltime in this place I call home. I love my job, and I especially like that I can make my living off this land without having to alter it in any way.” 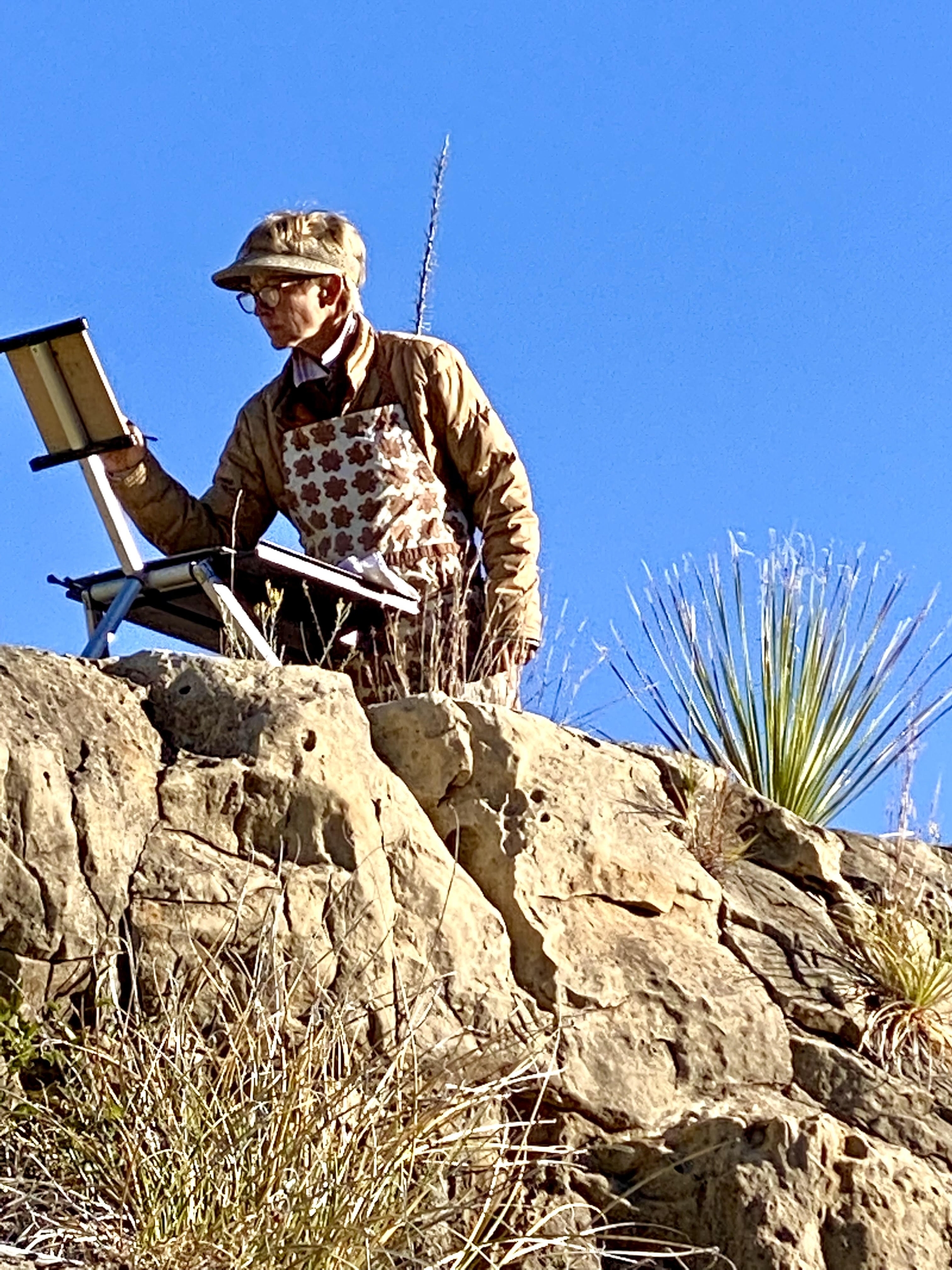 Mary Baxter en plein air, in her outdoor studio of the Chihuahuan Desert. “I moved to the Big Bend region over twenty years ago, when we leased a ranch southwest of Marfa for raising yearling cattle. Most of the time I lived there by myself, checking water and putting out feed, and training some horses for extra income. The landscape kept working on me and I began to paint my surroundings. This was in the pre-digital age and the only place to have film developed was in Alpine, two and a half hours away. So I learned to rely instead on sketches and notes for reference, a practice I still prefer to use today.” 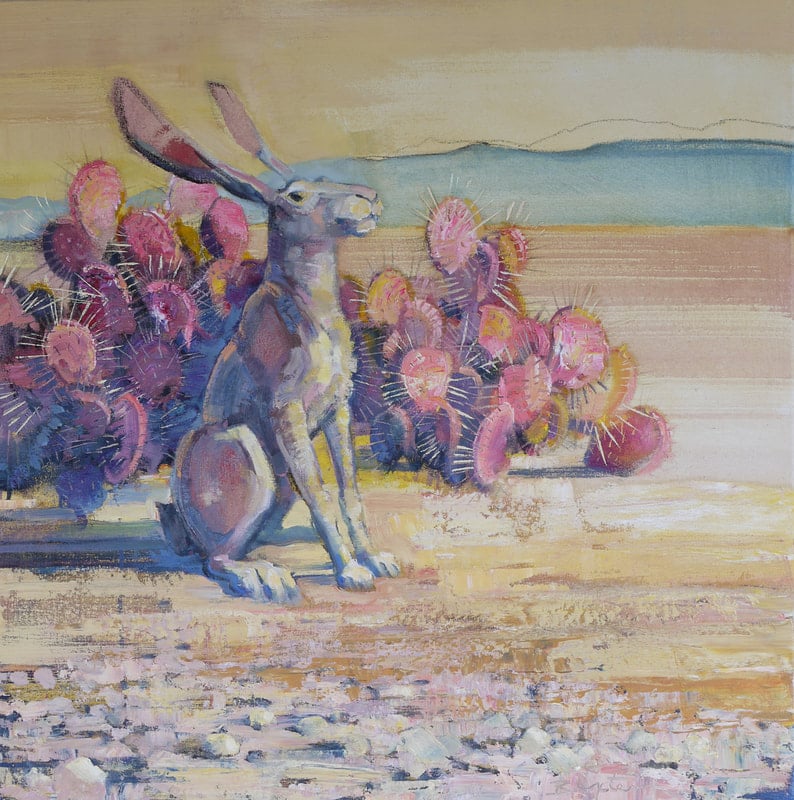 “This painting is of a large jackrabbit who was resting in the shade of a prickly pear bush. I was painting west of the Chinati Mountains, and while working on a landscape view, noticed that this rabbit seemed unbothered by my presence. He was more concerned about staying in his spot of shade, as it was plenty hot. We were in a vast flat expanse, and it made me think about all the animal lives there that we rarely cross paths with.” 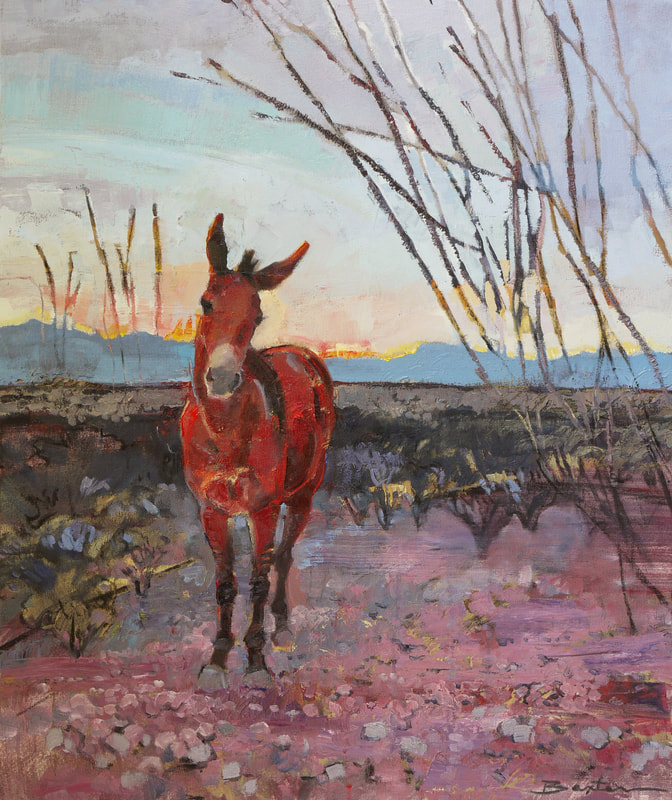 “This is titled ‘Mule in the Desert.’ I came across this single mule, also near the Chinati Mountains, and pretty close to Mexico, and thought she was beautiful. I had been wanting a mule, and so it was like a gift from heaven. Or maybe not. I tracked down a rancher who claimed her, and he told me I could have her if I could catch her. Turns out she wasn’t saddle broke, halter broke, and was mean to dogs. I decided I didn’t need THIS mule, and would keep looking. I figured she would get with the wild burros or some Mexican horses and wouldn’t stay lonely much longer. But she really was pretty.” 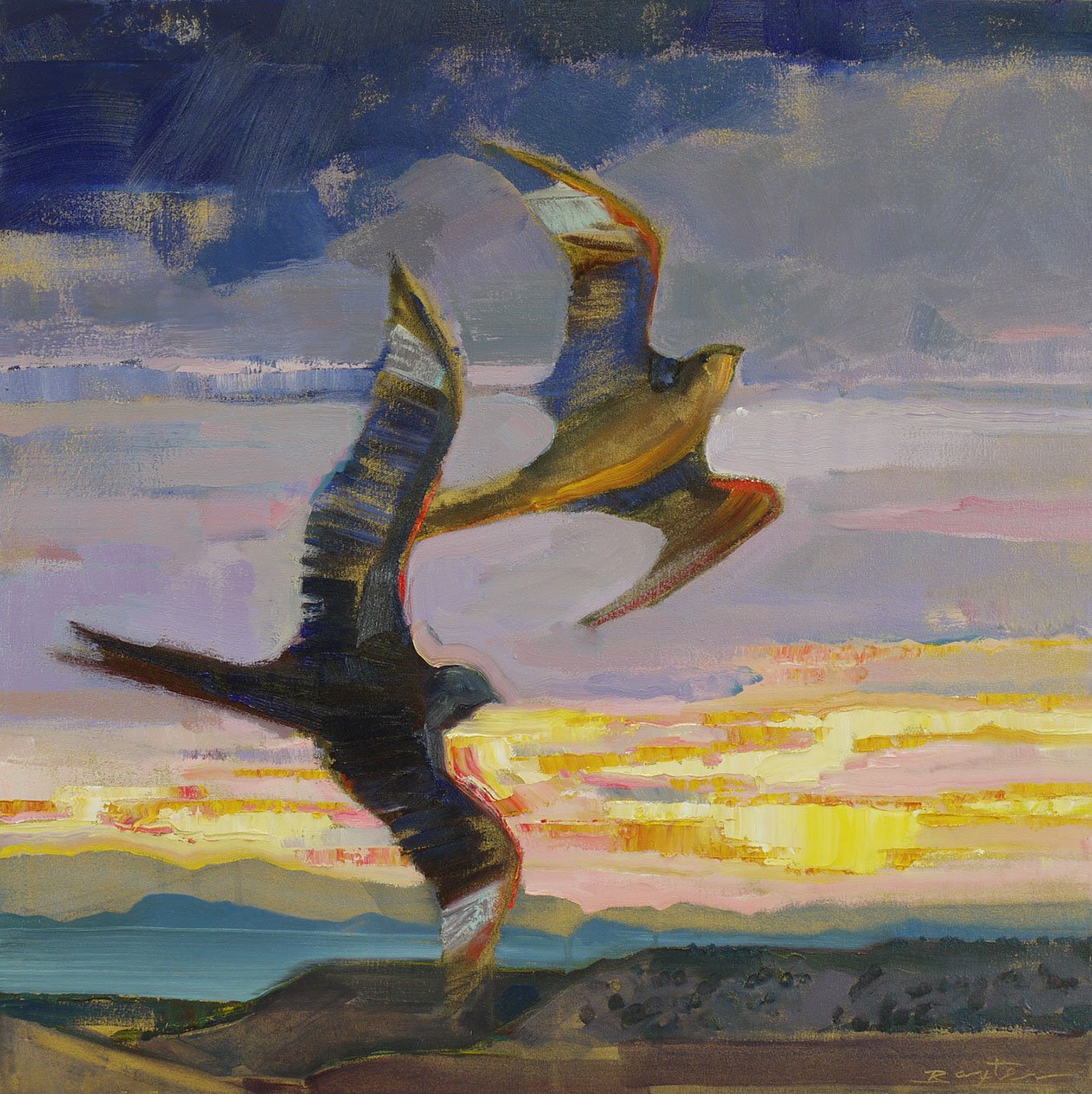 “I had been spending a lot of time down near the Chinati Mountains, and was concerned that I hadn’t seen any bull bats for days, although it had been warm weather and was the season they were usually around. Finally, one evening several pairs arrived, and filled the sky with their acrobatic flight and chirpy calls. All was good again. I think they are my favorite desert bird.” 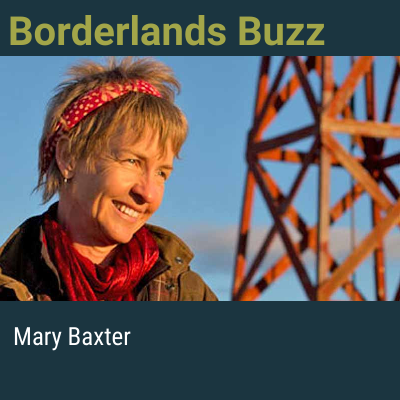 Listen to Episode #6 of the Borderlands Buzz podcast and hear Mary talk about how the Big Bend region inspires her to create beautiful works of art.