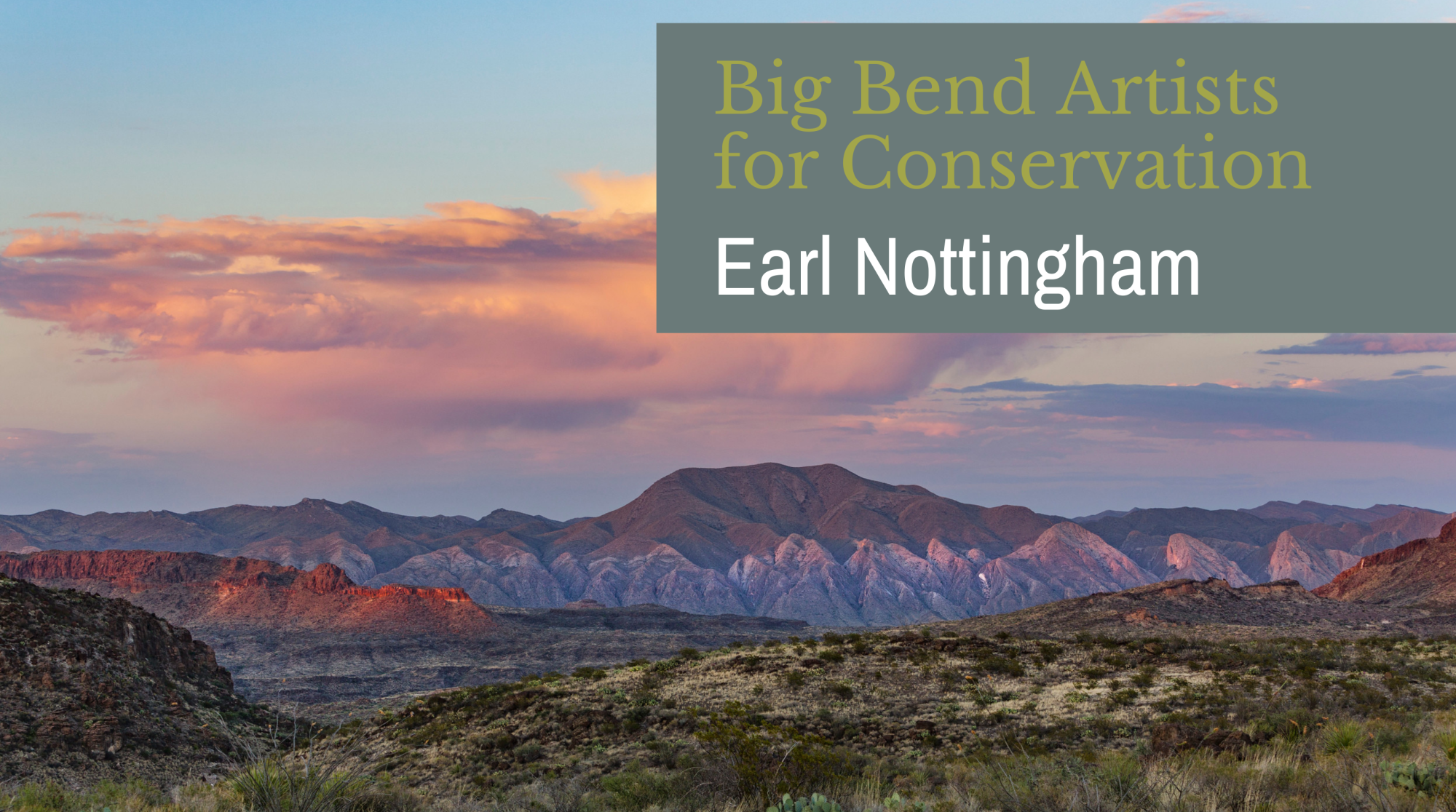 Earl Nottingham has been entranced with photography since he was a kid. His brother gave him a Polaroid Swinger camera when he was ten, and he stalked the neighborhood cats as his photo subjects. In junior high a friend’s dad owned a photography studio and showed him how a film negative was developed into a print in a dark room.

“I was absolutely smitten,” recalled Nottingham. “Watching a print emerge from the developer in a tray the first time was such a thrill. The chemistry was like magic to me.”

“And then I figured I knew everything I needed to know, so I came back to Temple, Texas, to work for my hometown newspaper,” he said. “It wasn’t as romantic as I thought it was going to be, and I only did that for a couple of years.”

Some of his newspaper colleagues encouraged him to complete a bachelor’s degree, which he finished at East Texas State University (now Texas A&M Commerce). The school had a renowned photography program, and Nottingham further honed his skills. He then embarked on a successful freelance photography career, shooting everything from weddings to magazine assignments.

With a growing family in mind, Nottingham decided to look for a “regular” job, and in 1996 he signed on as a photographer with the Texas Parks and Wildlife Department (TPWD), besting hundreds of other candidates. It was a position he often described as the best job in Texas, though it was anything but routine. Over the next 25 years, Nottingham would log literally tens of thousands of miles capturing images of the wild things and wild places of our state, and the people who have dedicated their lives to conservation.

Over those many years, Nottingham’s reputation as a master photographer was sealed, and his work has been a mainstay of Texas Parks and Wildlife magazine, and has appeared in other publications ranging from Texas Highways, Texas Monthly, Southern Living, Smithsonian and National Geographic Traveler.

A few years ago, he began pondering the timeline for his retirement from Texas Parks and Wildlife. He also began to think about a suggestion that had been made to him many times over the years.

“I’ve travelled to every corner of this state, and when on assignments a lot of people would tell me that I could probably write a book about my experiences,” said Nottingham. “As I got closer to retirement, I thought maybe I could.”

He approached Texas A&M Press with the idea and got an immediate yes. So, he began organizing a career’s worth of images into a semblance of order. It wasn’t easy.

“I started with about 200,000 images that were both digital files and also good old traditional film from TPWD archives,” he said. “That was the hard part, because I had to look at all of those little 35-millimeter slides with a magnifying loop and my old eyes. It took months, but I finally culled them down to 200 images.”

Those images are on glorious display in his recently published book Wild Focus: Twenty-five Years of Texas Parks & Wildlife Photography. The book is part of the Kathie and Ed Cox Jr. series on conservation leadership, sponsored by The Meadows Center for Water and the Environment at Texas State University. Nottingham is donating all book proceeds to Texas Parks and Wildlife Foundation.

Although he is reluctant to pick a favorite image or part of the state, there’s a big hint on the book’s cover.

“That photo is from Big Bend Ranch State Park,” said Nottingham. “If you force me to tell you what my favorite part of the state is, it would definitely be the Big Bend region. That cover photo was taken while I was teaching a photo workshop. It had been raining all day and the sky was dark, and we were in a van full of students navigating some flooded arroyos. Then, all of the sudden, as the sun was close to setting, there was a little opening in the western sky, and the sun came through.”

Nottingham says magical moments like that are memories he will treasure.

“There was that late warm sunlight, and everything in the desert was wet,” he recalled. “When it’s wet in the desert, all the colors just jump out and all of a sudden the place just came alive. I was going crazy! Everything happened at the right time, and we all captured beautiful images that day.”

“Tagging along as they relocated bighorn sheep from Elephant Mountain Wildlife Management Area to Big Bend Ranch State Park was one of the most memorable assignments I’ve experienced,” he said.” It’s just a real pleasure to see that conservation success story up close and to be able to document it. The photo assignments I’ve had in the Big Bend over my 25 years with TPWD have been a continuation of a 45-year love affair I’ve had with the region’s landscapes, wildlife, history and people.”

The Borderlands Research Institute (BRI) is pleased to feature the work of artists like Earl Nottingham who are inspired by the landscapes and the wildlife of West Texas. BRI’s Big Bend Artists for Conservation initiative aims to inspire conservation through art, and Nottingham is the latest artist to be featured.

“It’s an honor to be asked to join a roster that includes Ben Masters and Mary Baxter,” said Nottingham. “I’ve been fortunate to document some of the work the Borderlands Research Institute is doing to conserve the landscapes and wildlife of Big Bend and West Texas. I want to support that work in any way I can.”

Learn more about Earl Nottingham at earlnottingham.com. You can find his book at Texas A&M Press or on Amazon. 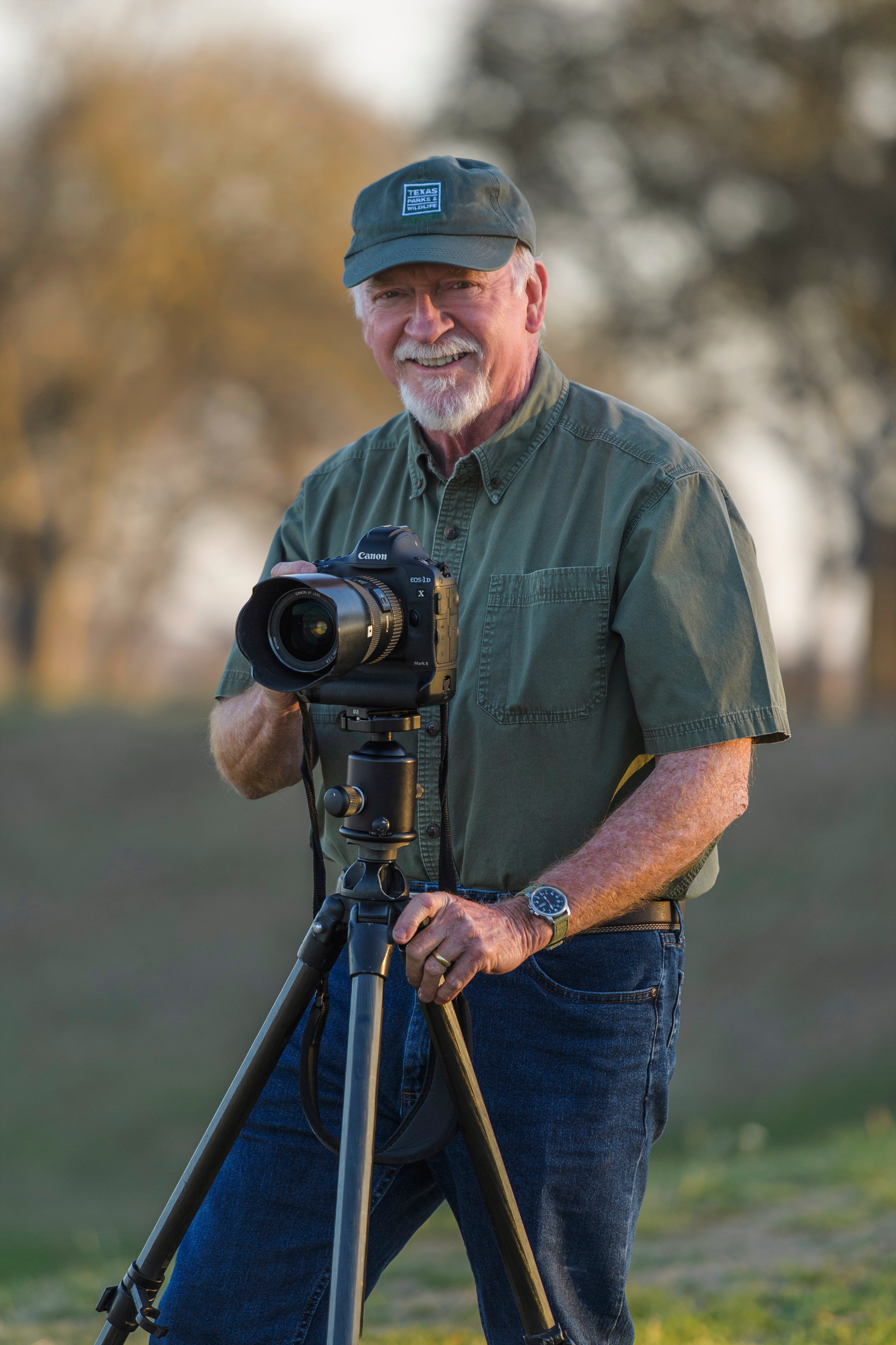 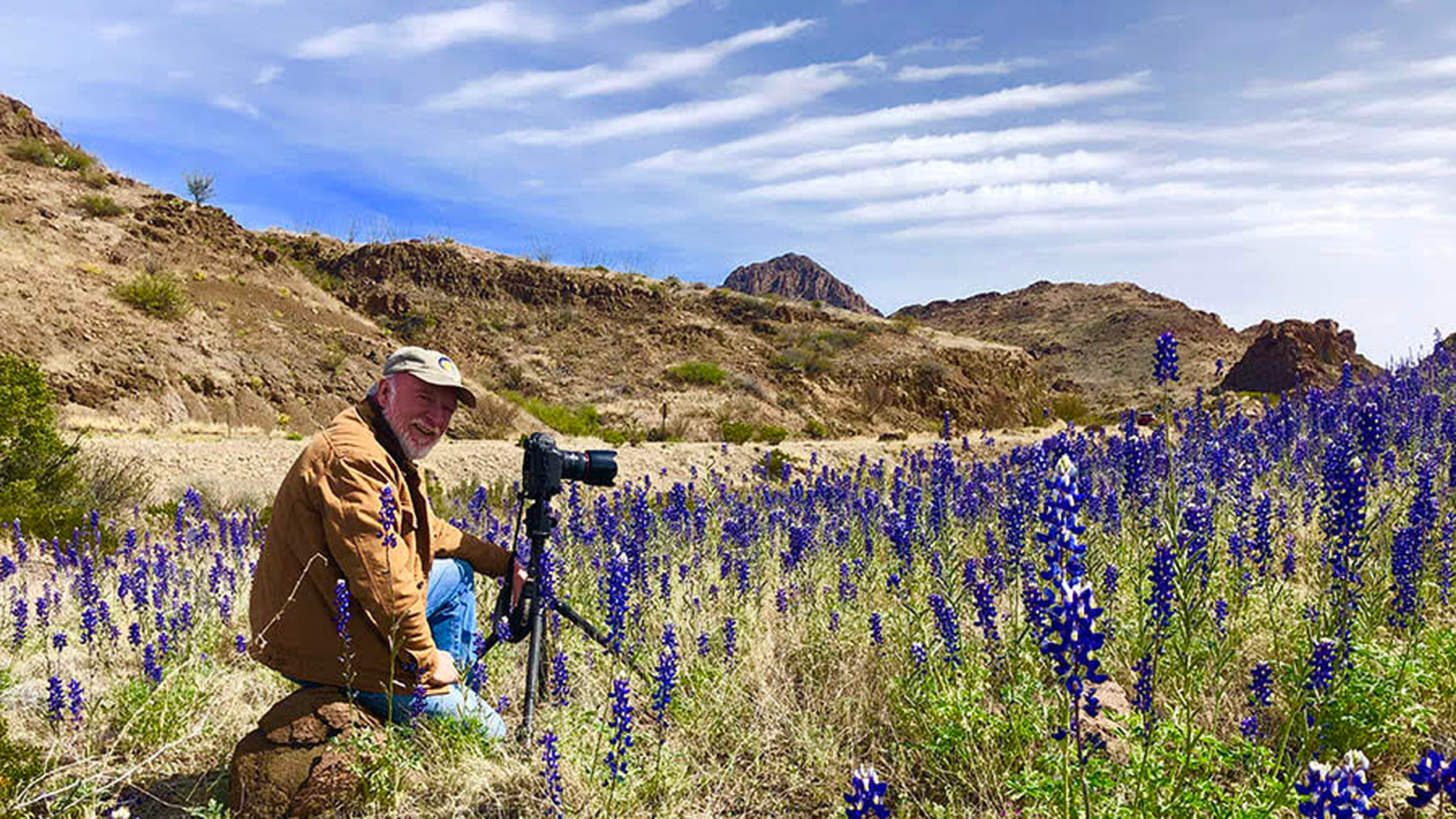 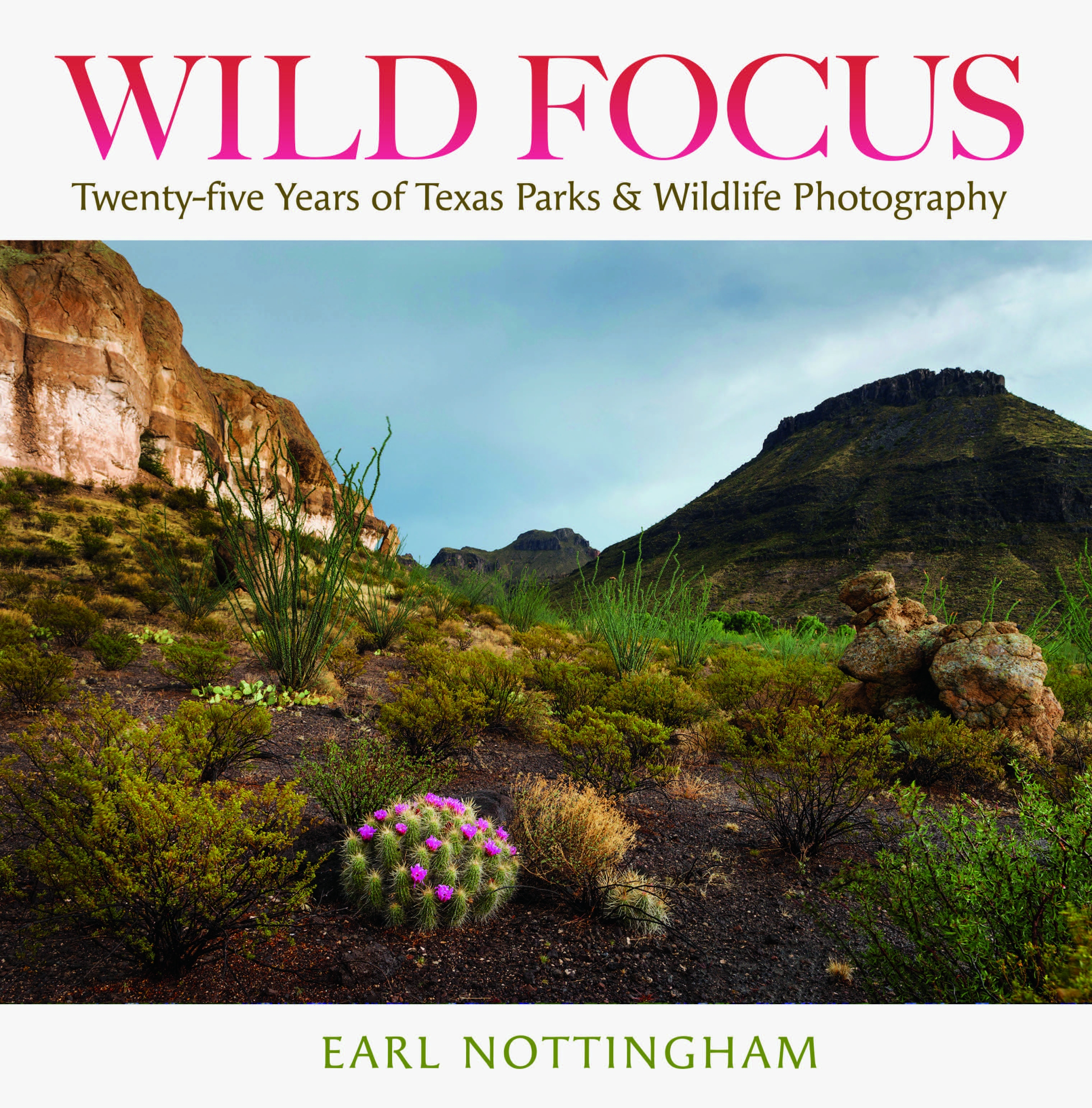 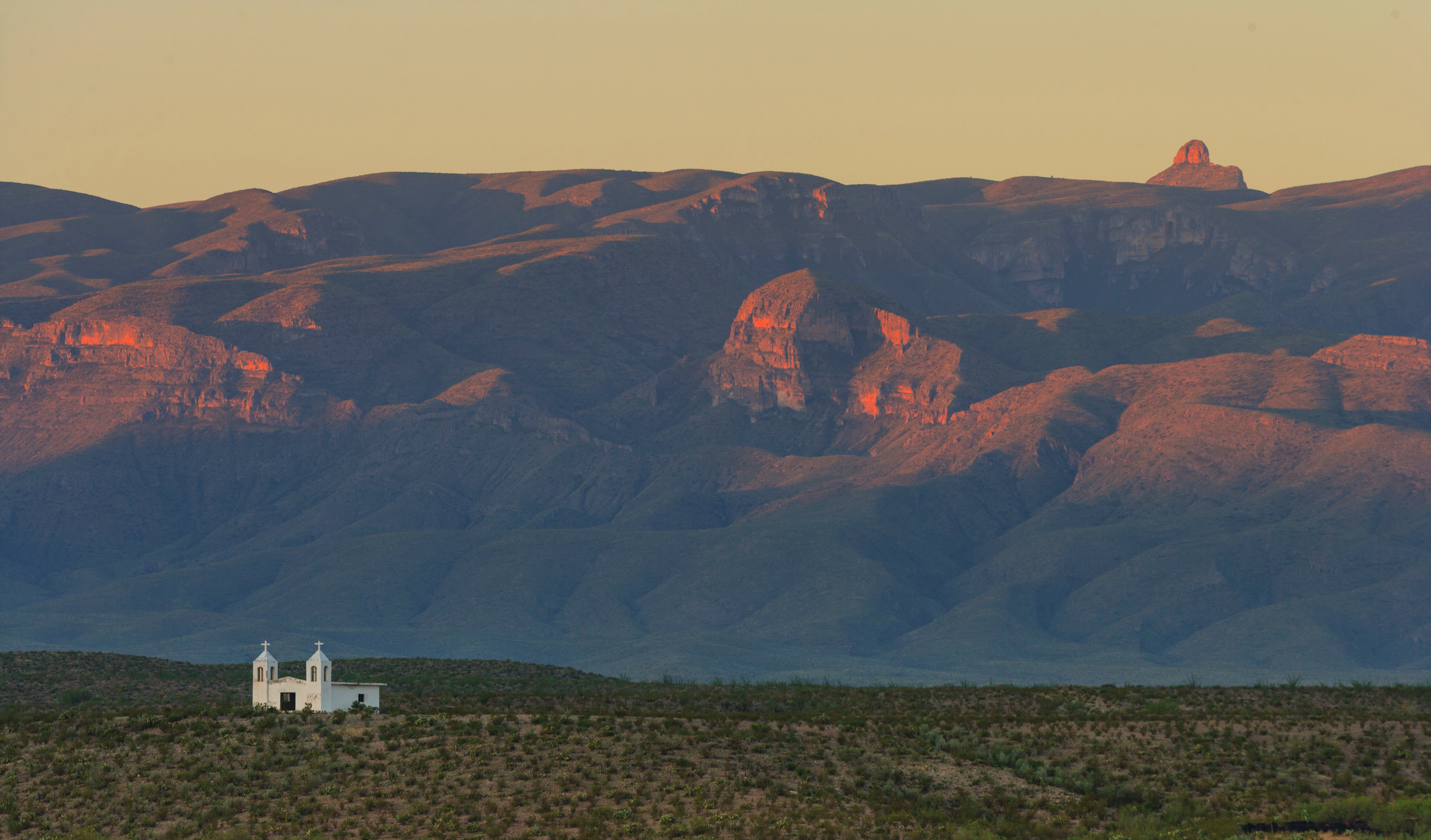 “This is an old Catholic church in La Linda, Mexico. This is very close to the Black Gap Wildlife Management Area. It’s literally at the end of the road. This photo was taken about 20 years ago when there was a crossing over the border. The church is in Mexico, but the mountains in the background are in the United States.” 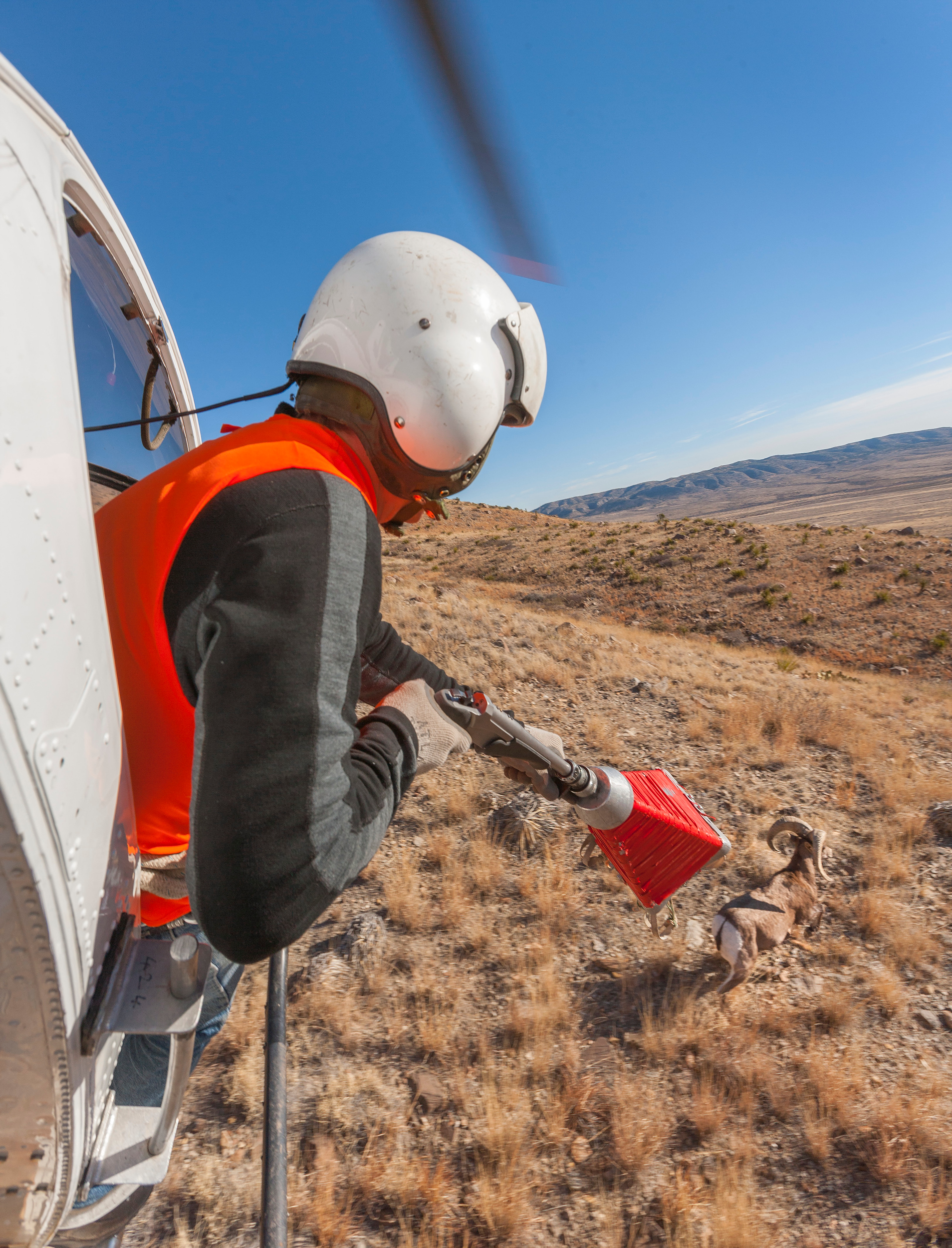 “You have to go where the photo is, and if that’s outside the helicopter while it’s in the air, that’s where you gotta go. You definitely have your seatbelt on and you might loosen it up just a little bit to be able to lean out. It’s safer than it looks! That’s the perspective you need for a good shot.” 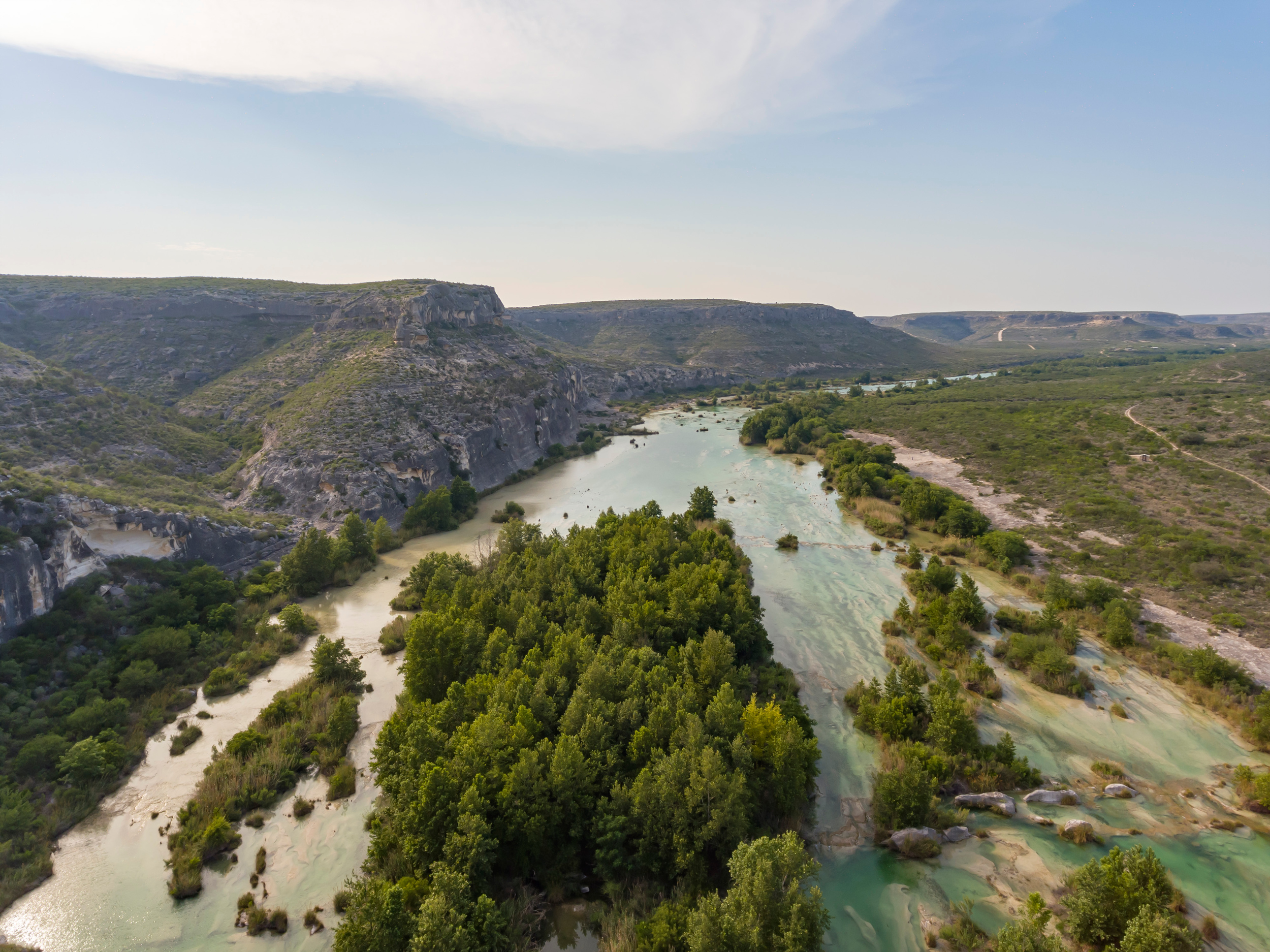 “This shot of the Devils River was shot with a drone. The drone has become a necessary tool in a photographer’s toolbox. It shows the Texas landscape from a perspective that you don’t normally get. There’s a lot of impending encroachment on the expansive views of the Devils River. Civilization is moving ever closer, and there’s a lot of controversy about wind turbines that may end up here.” 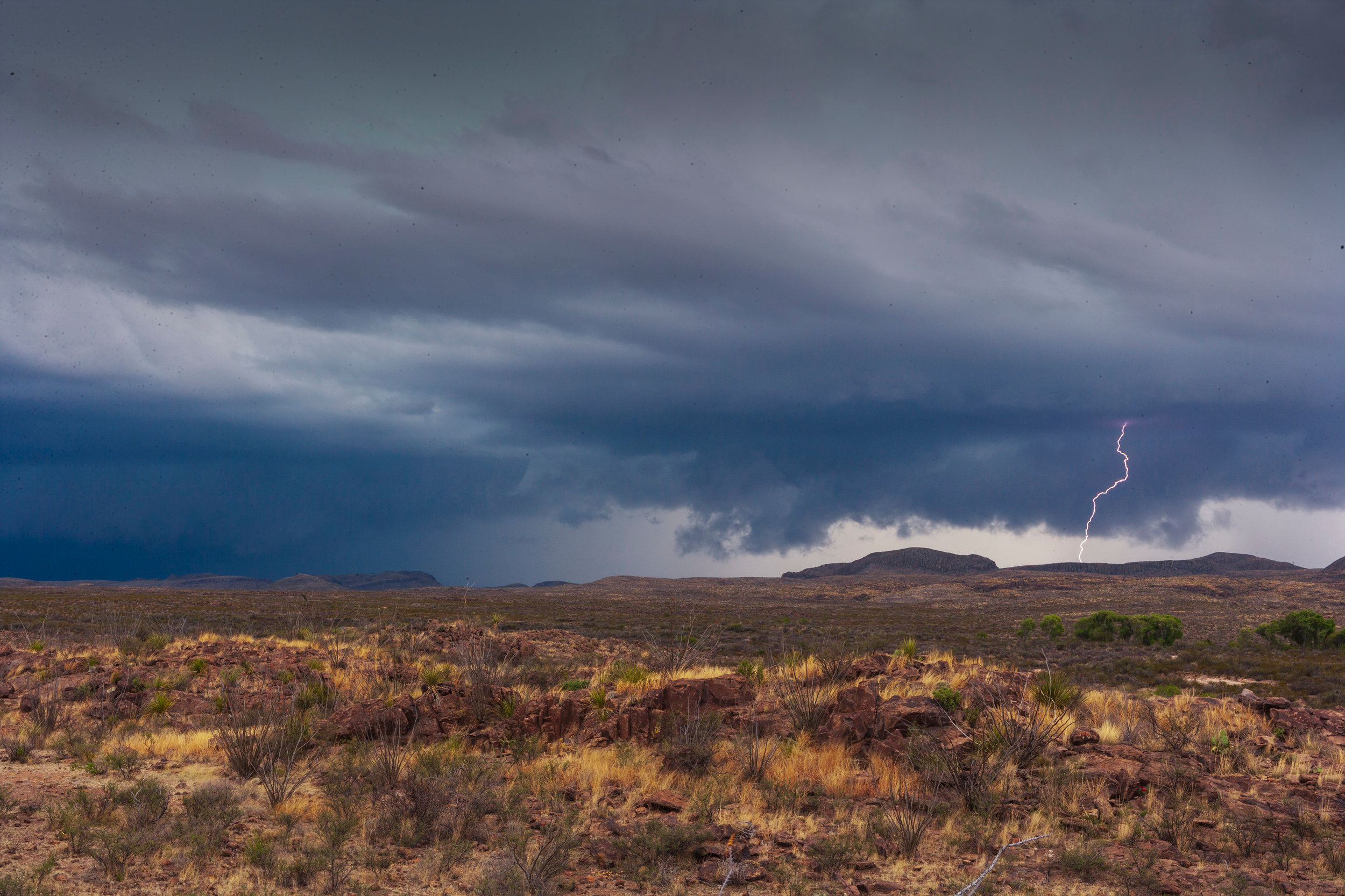 “This was shot at Big Bend Ranch State Park. Especially in the late summer during the rainy season, you just get gorgeous skies and the storms come through. It’s a photographer’s paradise. The skies are wonderful. To try and capture lightning strikes, you just leave your shutter open. You have to close your lens down real far, so you can leave your shutter open for 10 to 20 seconds. And if you’re lucky, somewhere in that 10 to 20 seconds you’ll get a lightning strike like this one.” 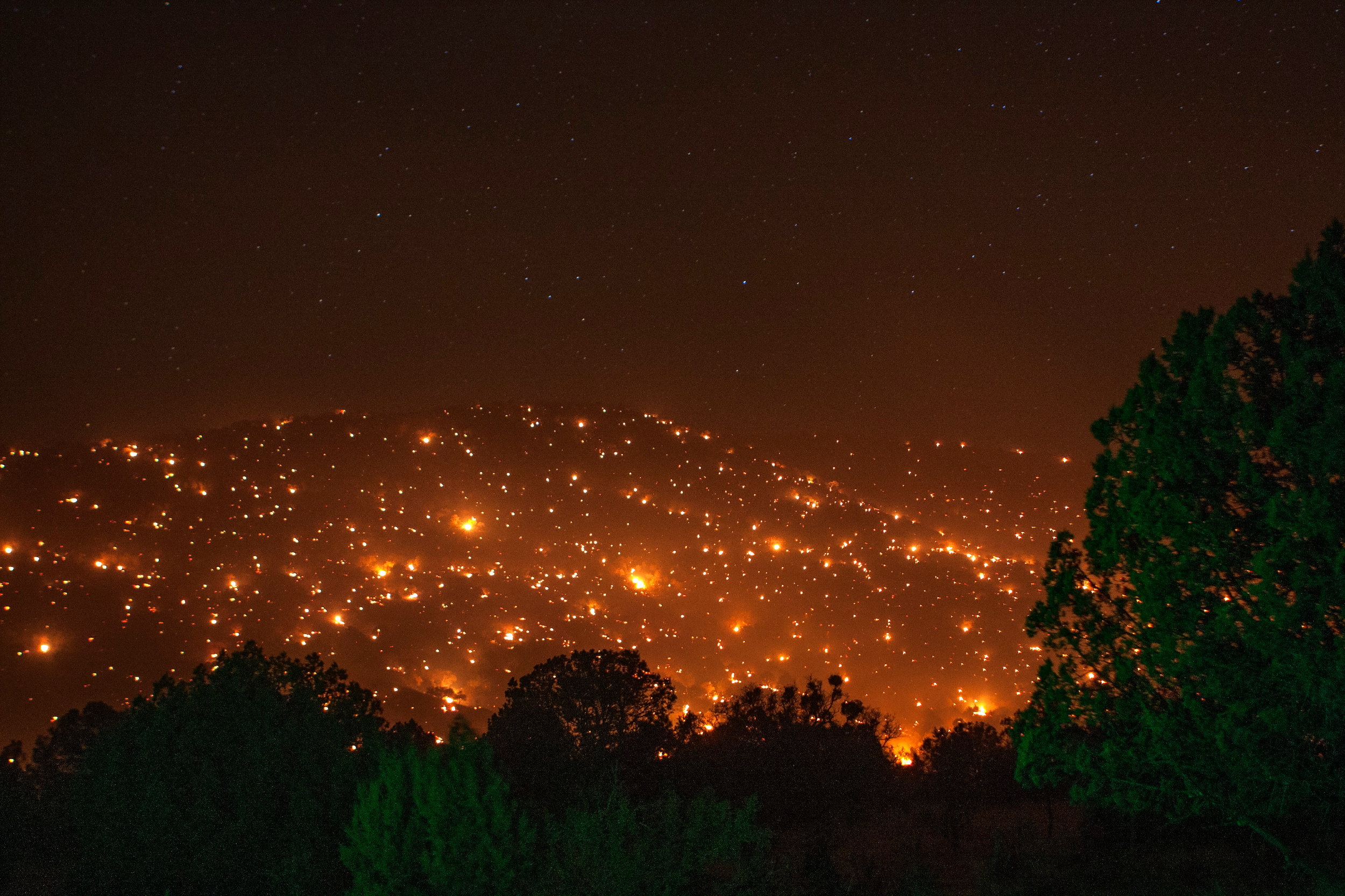 “This is one of the Rock House Fire that happened in 2011. What you’re looking at is the hillside, after the fire tore through. These are just embers burning up on the mountainsides, but up in the sky, you can see the stars. It was really surreal with the twinkling stars and the twinkling embers in the same shot. ” 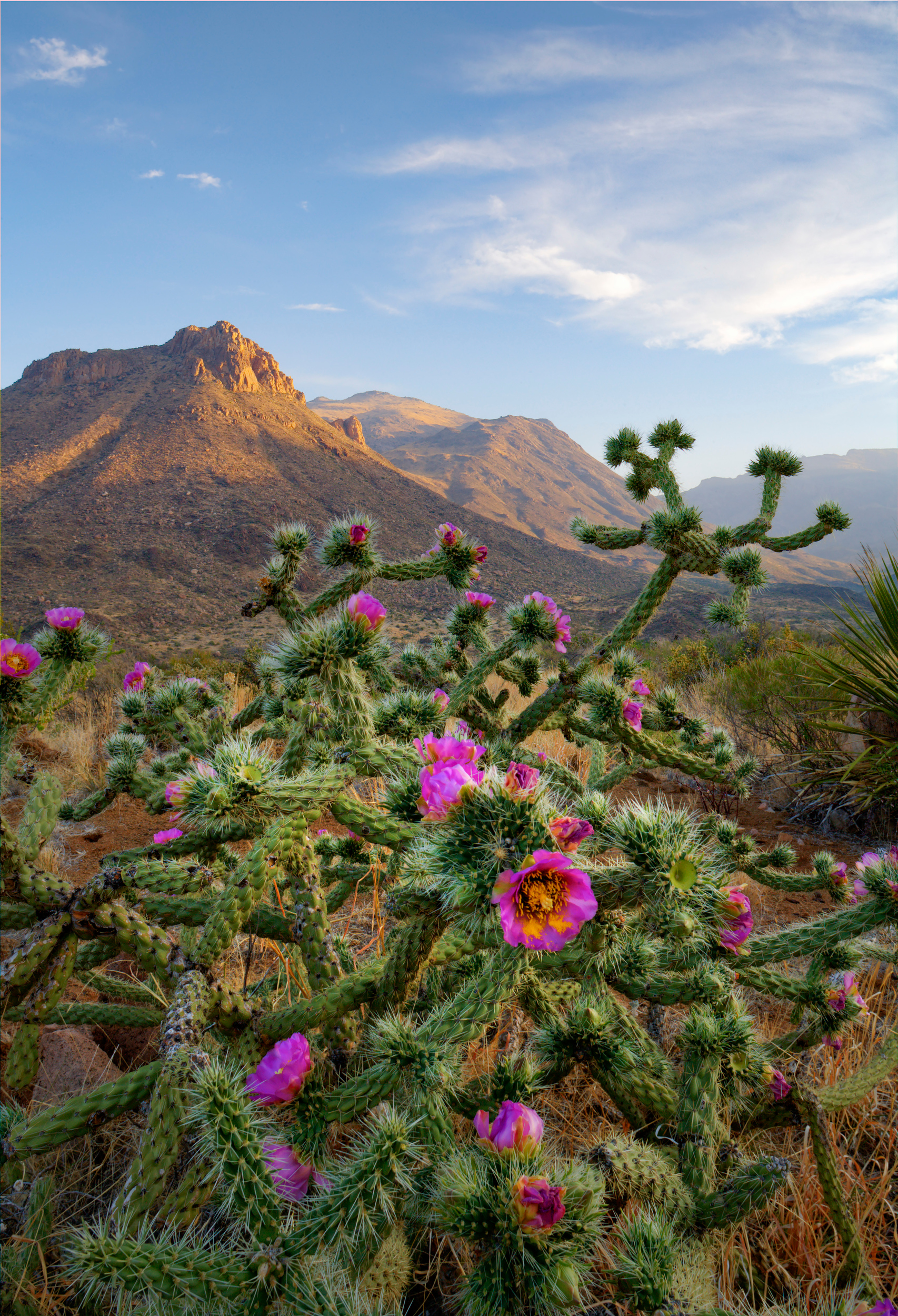 “That’s Chinati Peak in the distance. We got permission to get in this area and spend several days documenting what’s there, just to have images on file for future use. It’s not open to the public because of access issues. It was really neat to get permission to go in there. ” 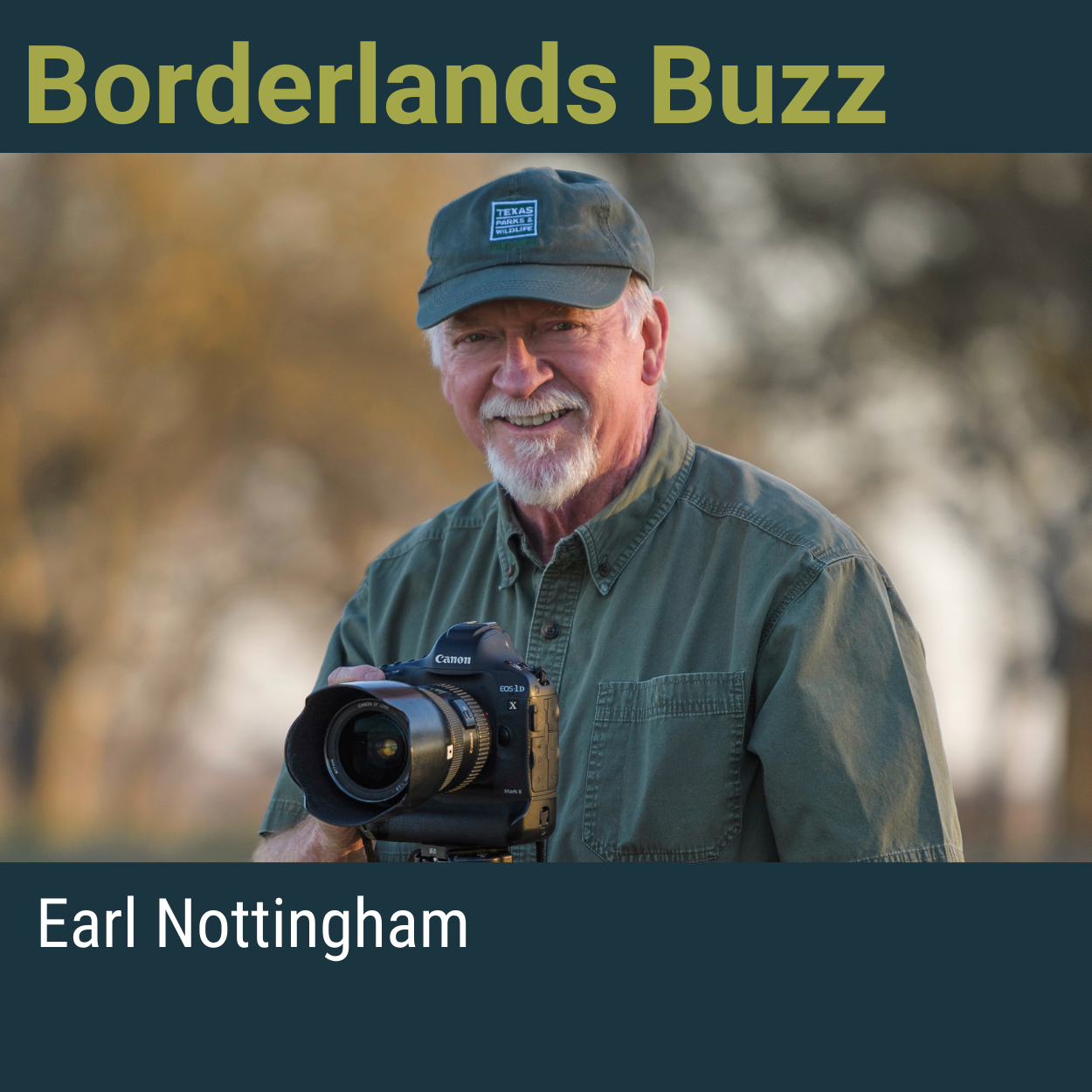 Listen to Episode #7 of the Borderlands Buzz podcast and hear Earl talk about how he has been telling the story of Texas and much of the American Southwest through his photography.