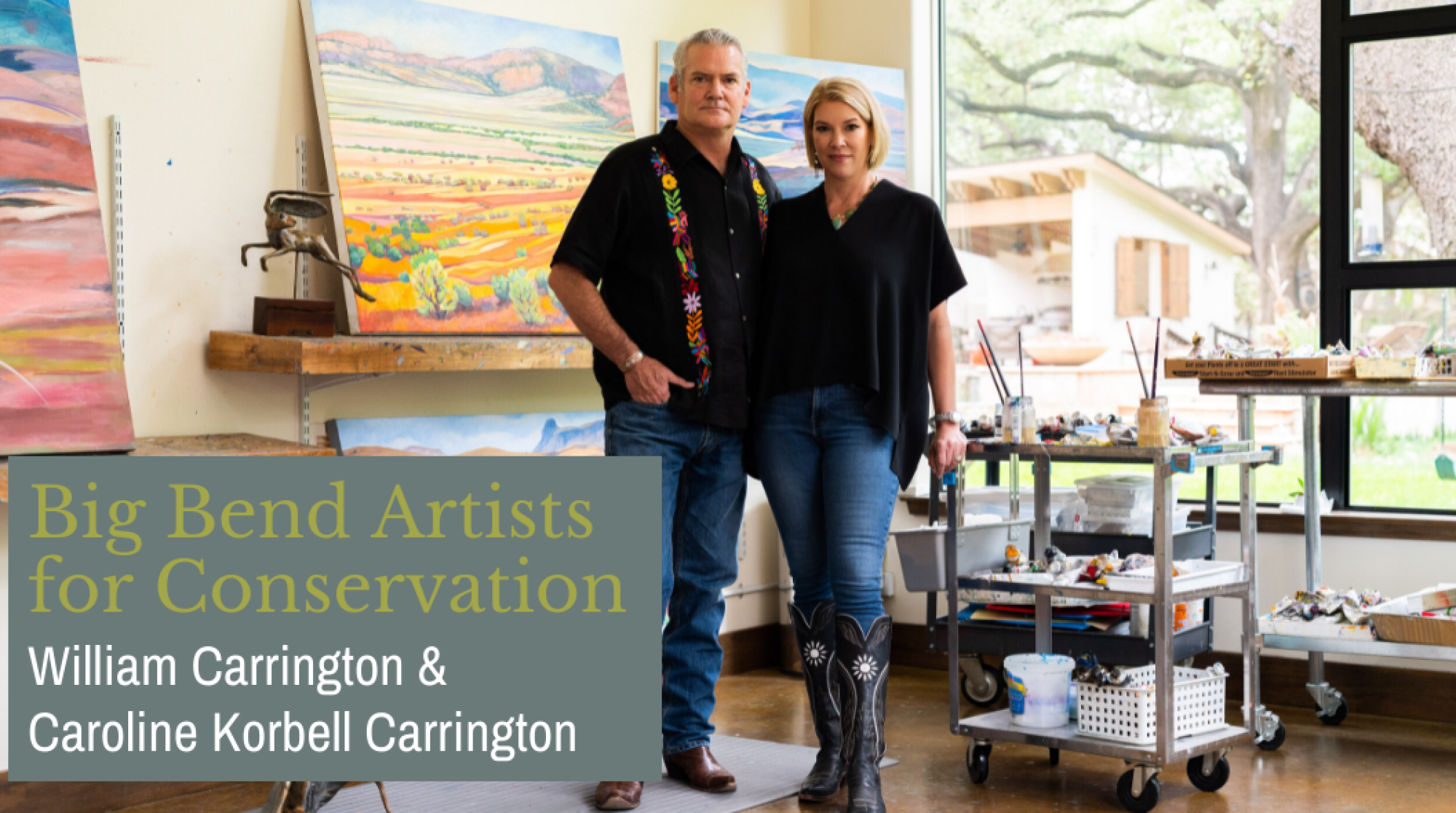 Caroline Korbell Carrington and her husband William spend a lot of time in West Texas. Caroline’s extended family owns several ranches there, and she’s been going out there since she was a little girl.

“I grew up in a ranching family, and was fortunate that my family had property in West Texas, South Texas and the Hill Country,” she said. “But my favorite spot in the world is the ranch between Alpine and Marfa. I am just drawn to that landscape more than any other.”

Today Caroline makes a living painting the landscapes she loves. She’s a well-known artist who works alongside her husband, who is also an artist. William is a sculptor known for his whimsical works depicting wildlife. The two work out of his and her studios with a gallery in between at their home in San Antonio. They are both inspired by their love of wildlife and West Texas.

“We hunted quite a bit together before we had kids, and those experiences just reinforce our love of nature and the outdoors,” said William. “I was introduced to West Texas when I was a kid, and worked as a camp counselor at Prude Ranch in Fort Davis for several summers. Now we make regular trips out there and we just love it.”

William’s artistic journey was inspired in part by his wife’s creativity and his own desire to take a different path than the one he found himself on during his early work career. He says he played it safe in college and got a communications degree, then worked for years as a graphic designer. But he had a change of heart about his career path, went back to school for a master’s degree in education, then taught elementary school, including art, for more than 15 years. After being burned out by that, he took another career leap.

“I’ve always loved to work with my hands and did some sculpture as a hobby, but I never had lessons,” said William. “I called a foundry and asked them what I needed to buy and what I needed to do, and just went from there.”

Shortly after, he realized that sculpture is what he is meant to do. As a lifelong hunter, William is tuned in to the wildlife around him, and his keen observations about wildlife behavior can be seen in his work.

“We love watching wildlife out in West Texas, especially the jackrabbits,” said William. “All those poor guys do all day is try and survive. Everything’s trying to get them, from the air, from the ground, you name it. I see humor in that, kind of like the coyote and road runner. You’ll see that in my work. I exaggerate their running or their movements just because that’s how I see it in my mind.”

Caroline’s work is filled with the colors of the desert landscape, and evokes a comparison to George O’Keefe, an artist she greatly admires.

“I’m just in awe of the space and the rugged beauty of West Texas and the Big Bend area,” said Caroline. “It’s always changing, the light, the seasons. You can watch a sunset and the colors are different from one day to the next. I just can’t get enough of it and I love to paint it big and bold and dramatic.”
The two connected with the Borderlands Research Institute (BRI) at Sul Ross State University during their frequent visits to the area. They’ve opened the gates of their family ranches for BRI graduate student research projects ranging from pronghorn restoration to mule deer antler development. They were honored to be asked to join the ranks of BRI’s Big Bend Artists for Conservation.

“Understanding what’s happening with the wildlife populations out here is important to us,” said William. “The work BRI has done with other partners to reverse the decline of pronghorn populations is a great example. By investing in science, you are investing in conservation. BRI is trying to discover what is going on and how we can reverse it.”

“Some of us take this open space for granted. And when you look close to our cities, it seems that it is a human instinct to want to fill it in,” said Caroline. “We want to fill a space or make it our own or change it somehow, and really, it’s perfect the way it is. Obviously, we have to make room for humans, but we just need to be more aware of it and careful about how we fill in these wide-open spaces that we love in Texas.” 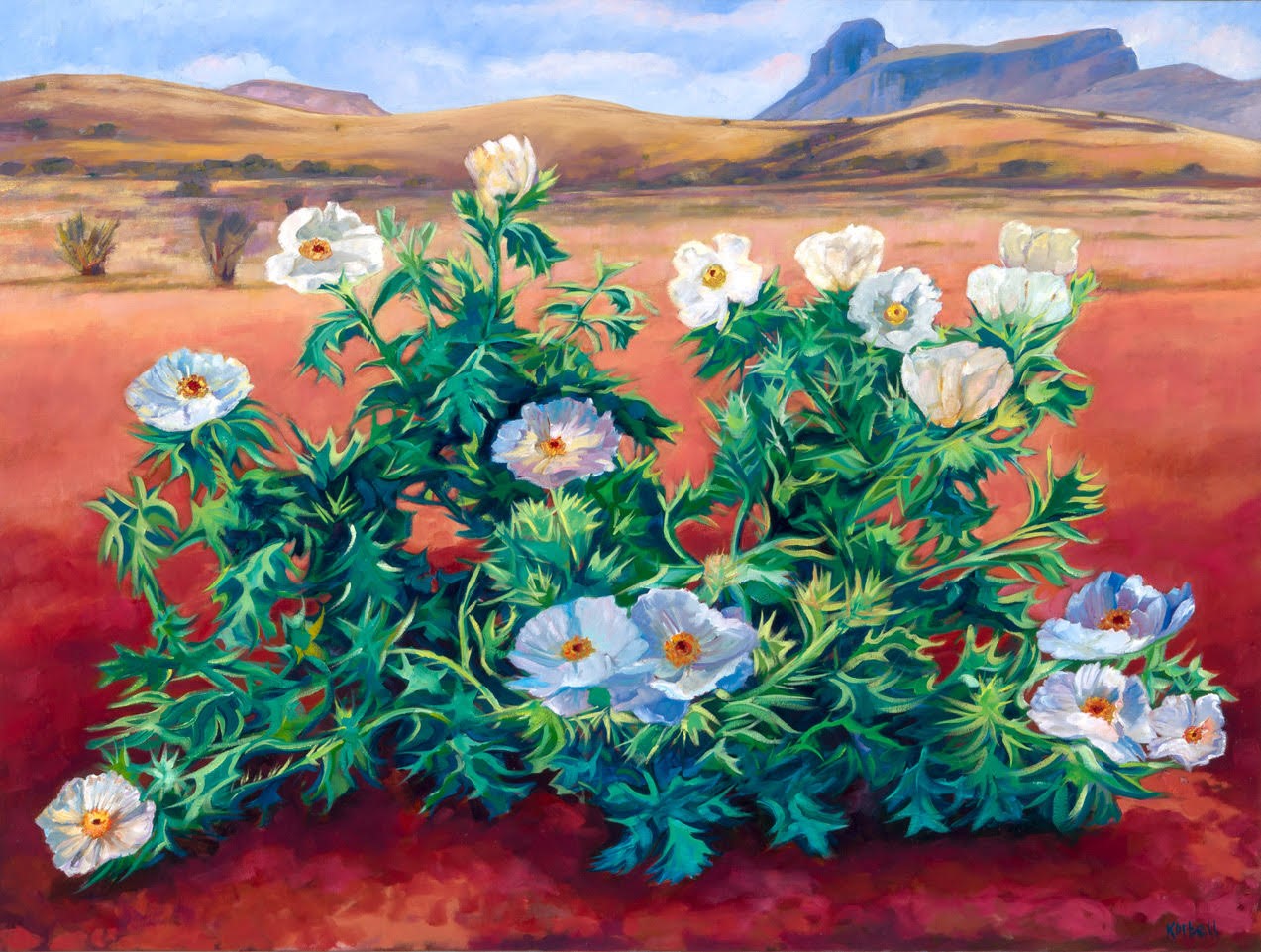 “This painting is titled ‘West Texas White Poppy’ and was painted in 2021. This is an oil on canvas, 36” x 48.” There is always a drought going on in the Marfa Plateau area. I love how this amazing white poppy plant decided to bloom anyway. It reminded me of what Georgia O’Keefe painted. She is one of my favorite painters of all time.” 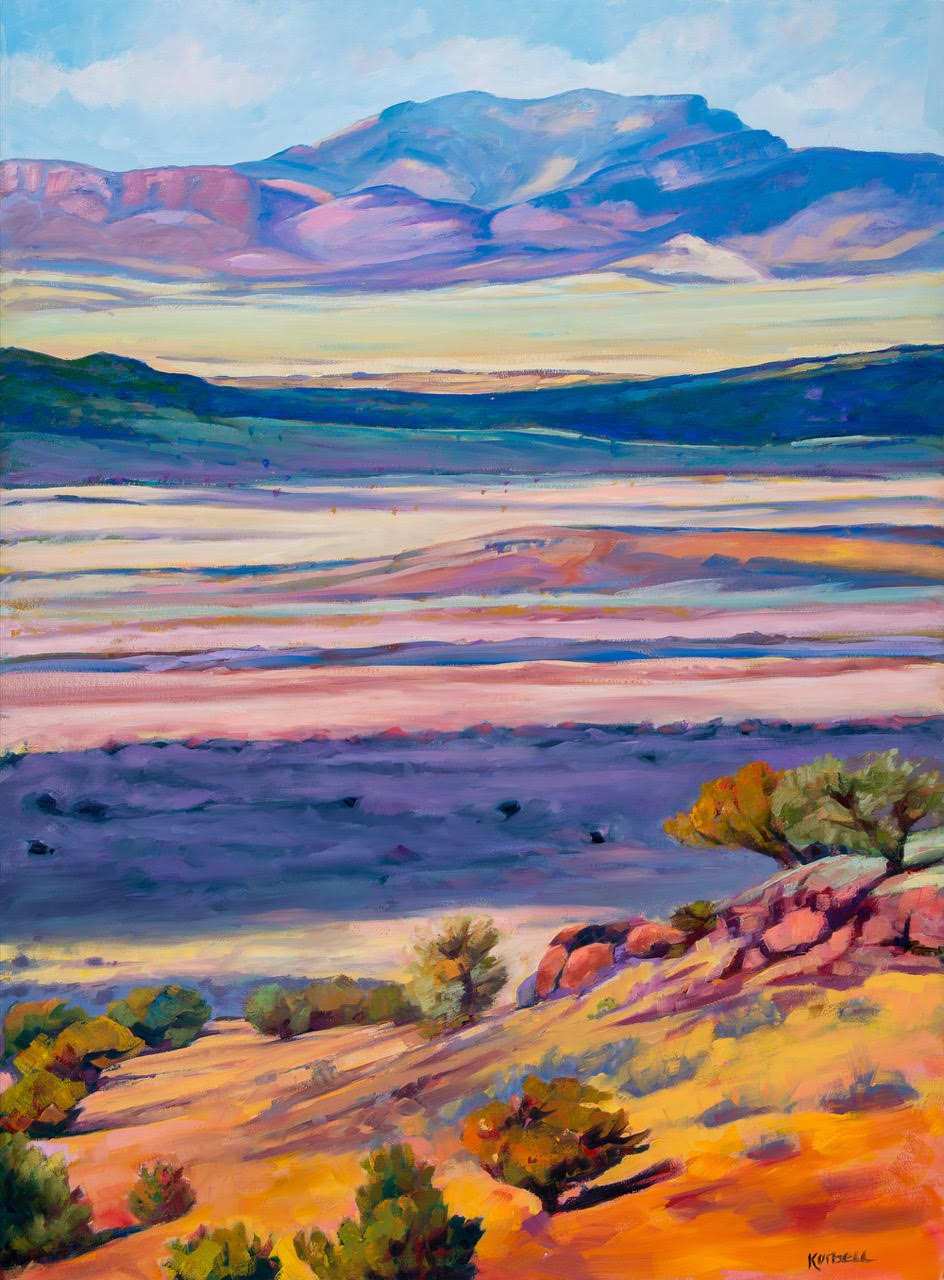 “This painting is titled ‘Marfa Landscape,’ 22” x 30,” oil on paper, 2019. I love the texture of paper for quicker paintings. I was driving in the late afternoon in the summertime and captured the shadows laying on the landscape in various colors. It stopped me in my tracks! Everything is painting worthy in West Texas.” 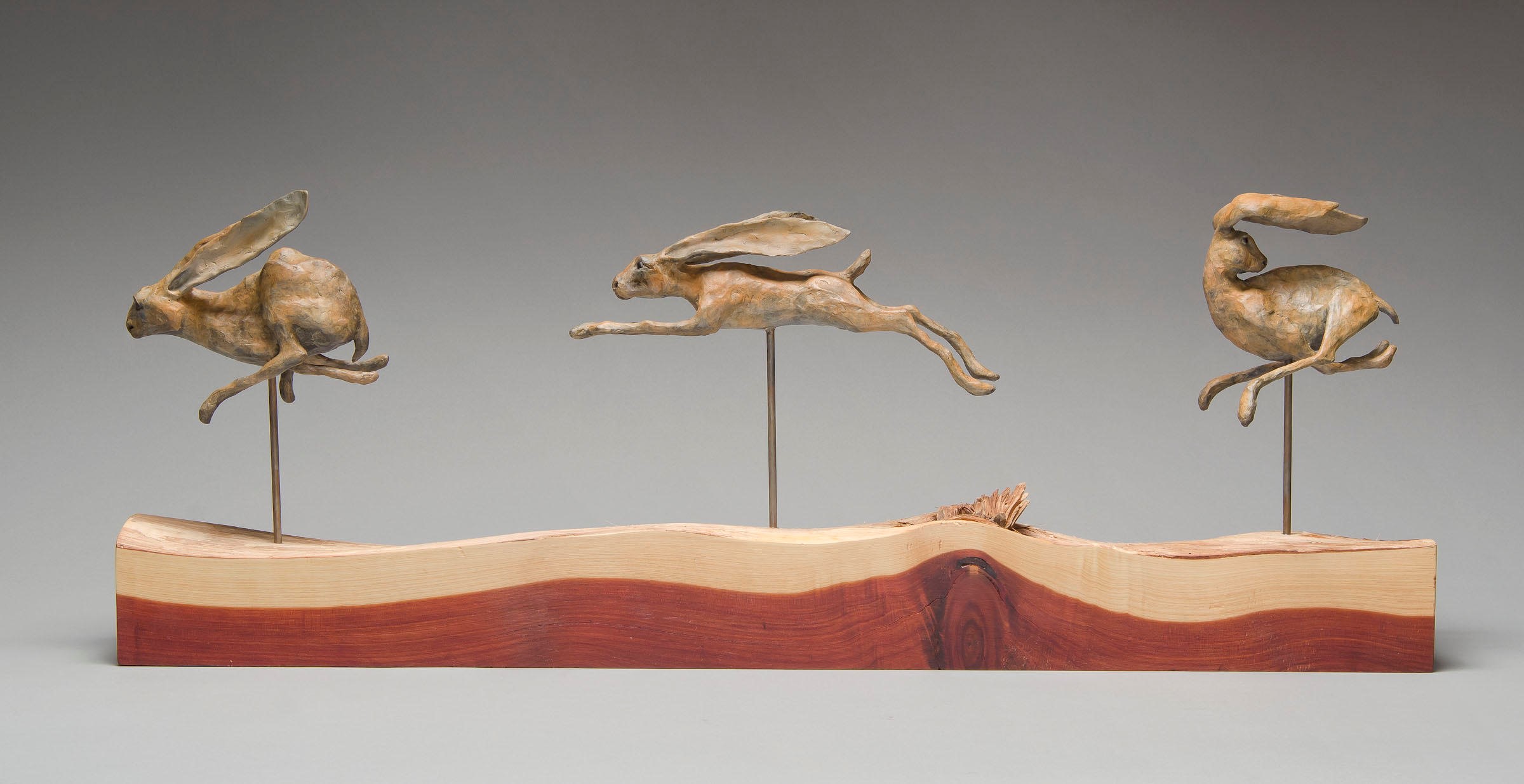 “This piece is titled ‘¡No Mire Atrás!’ Which means don’t look back! It reminded me of when I was a child riding a bike to school, and the neighborhood dog began to chase us, and my friends would yell, ‘don’t look back!’ In 2011, when I was out in West Texas, I observed rabbits running from predators, and it made me think of being yelled at, ‘don’t look back!’ The belief was by looking back, you will certainly get caught.” 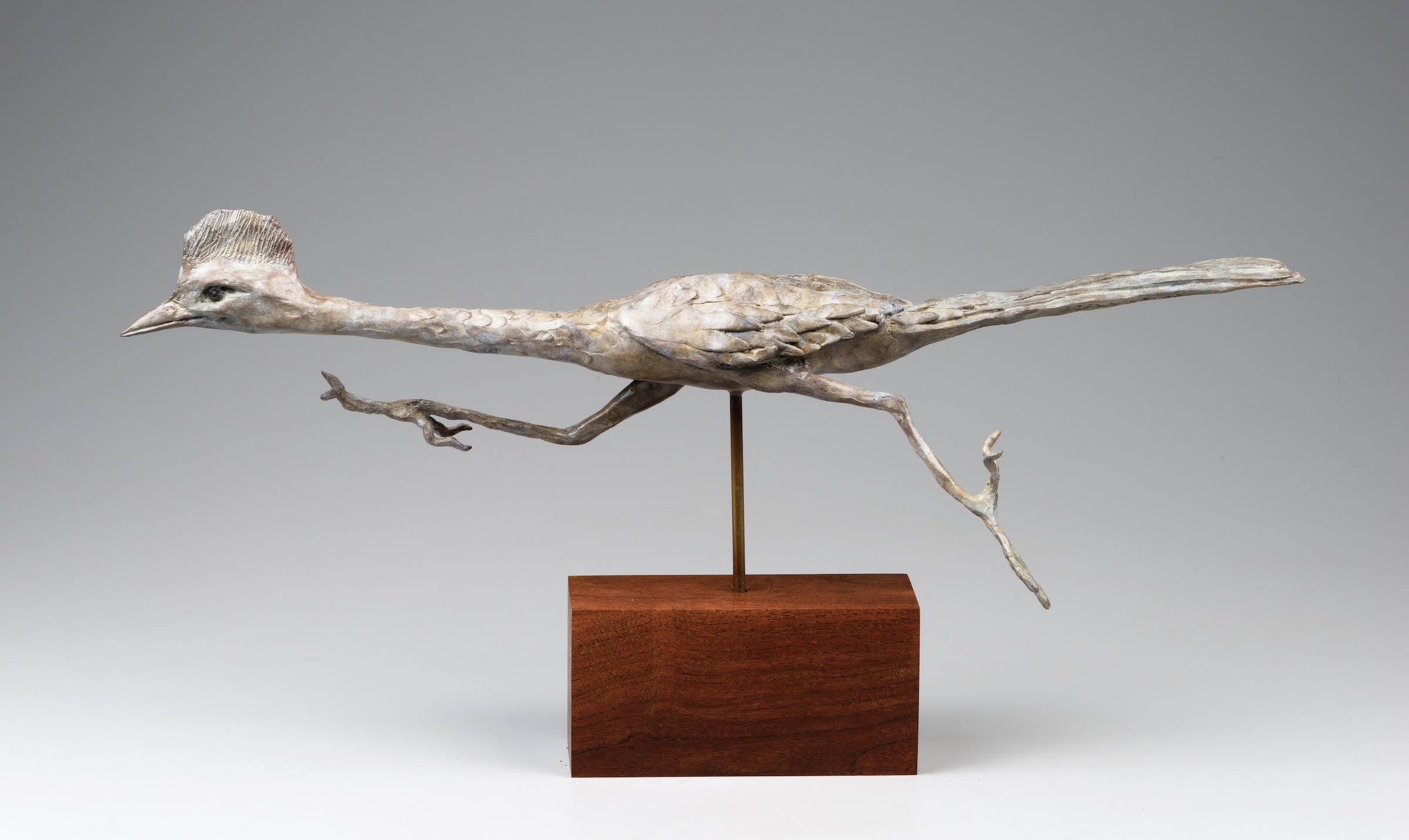 “This piece captures the roadrunner’s speed. I recall the times they get in front of you driving on a country road, and they run ahead for great distances in a straight line rather than zip off to the side. I find it quite humorous when this happens.”

Listen to Episode #8 of the Borderlands Buzz podcast and hear William and Caroline talk about how the wilderness of Far West Texas inspires their art.